We're always on the lookout for new and interesting news from the field. Working with some of the top pros in the world would inevitably uncover some really unique stories, about the scientific, artistic and commercial projects that most of the photographers in our galleries are working on at any given time.

When we heard about a new Nissan concept car designed around the needs of Dr. Alex Mustard, we knew this was one of those stories. 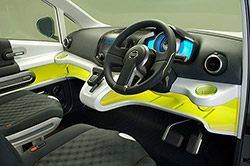 I only hope they exhibit the final prototype at the New York car show so I can see it live. The car will be unveiled at the 40th Tokyo Motor Show on October 26th.

"It was such a fun project to be involved with, and flattering too, that a big car company like Nissan is interested in underwater photography." says Alex Mustard. 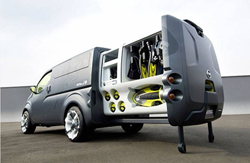 From the Nissan release:
"When renowned marine biologist and underwater photographer Dr Alex Mustard sets off on an expedition, he takes with him a mountain of equipment. He needs underwater cameras and lights for his photography plus scuba diving equipment such as wet suits, flippers, masks, air tanks and breathing apparatus. He even takes an underwater scooter for recognisance trips beneath the surface. He carries with him computer equipment for downloading his digital images once 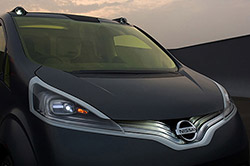 he resurfaces and he needs mobile communication equipment to send the images to clients or research centres. Naturally he needs a change of dry clothes and if he is planning on being out on an expedition for more than a few hours, he needs food, water and perhaps somewhere to sleep. In fact, he takes enough gear to fill a small van. And he would benefit enormously if that van could double as a mobile office. As far as Dr Mustard is concerned such a vehicle has been nothing more than a dream... until now. One of the stars of Nissan's stand at October's Tokyo Motor Show is the NV200, a concept for an entirely new sort of small van that answers all the marine biologist's needs."

Congratulations Alex on being involved in such an exciting project!

You can read the full press release and view more images on Alex's website.