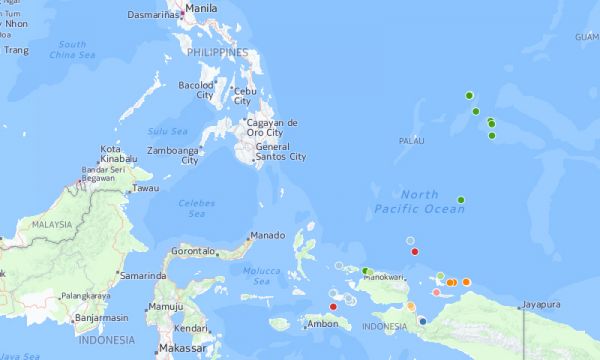 Conservation International (CI) has unveiled a new webpage which shows, in real time, the movements of whale sharks that they are currently studying in the Bird’s Head Seascape.

Last year, CI scientists managed to attached satellite transmitters to the dorsal fins of whale sharks for the first time. This was made possible by working with Indonesian fishermen who had accidentally caught the huge fish in their nets, allowing the scientists to dive down and attach the transmitters before releasing the animals. Since then, much exciting data has been gathered about the world’s biggest fish, including their migratory patterns and their diving behaviors.

Now, CI is providing a map showing where the tagged whale sharks are, so interested visitors can keep an eye on the behemoths in real time. You can also vote for a name for one of the as-yet-unnamed individuals —or propose your own name.

Check out the new webpage to find out what has been learned so far from tagging the whale sharks.