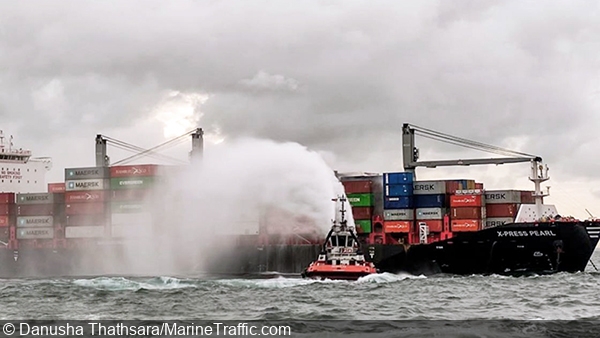 Tons of plastic pellets are blanketing beaches on the west coast of Sri Lanka after a fire aboard a Singapore-registered container ship that is anchored near Colombo. The unfolding incident constitutes a major environmental disaster for the country, and there are fears that the ship will sink, leaking hundreds of tons of oil into the sea, with devastating consequences for the region’s marine life.

Mongabay reports that the vessel, the X-Press Pearl, which was newly commissioned in March, is carrying 327 tons of heavy fuel oil, 56 tons of marine fuel oil, and 81 containers of “dangerous goods,” including 28 tons of nitric acid. The ship also contained 86 tons of plastic pellets, and it is this toxic cargo that is now covering Sri Lanka’s western coastline.

According to the X-Press Pearl Incident Information Center, the crew first reported smoke coming from the cargo hold on May 20th. The following day, the fire broke out on deck and intensified over the next week despite the efforts of a 12-person firefighting crew. The ship’s crew and the firefighters were evacuated from the ship on May 24th. The fire has now been brought under control with the help of firefighting tugs, the Sri Lankan Navy, and the Indian coast guard. However, rough seas are making the operation difficult and experts have not yet been able to board the ship to assess the damage.

The company that owns the vessel, X-Press Shipping, has confirmed that the crew was aware of a nitric acid leak aboard the ship before the fire broke out, but both Qatar and India refused to allow the X-Press Pearl to remain in their waters. Sri Lankans are now voicing their anger on social media that the ship was permitted to enter their country’s waters instead, threatening the health and livelihoods of local people and prompting an environmental catastrophe that could have very long-lasting impacts.