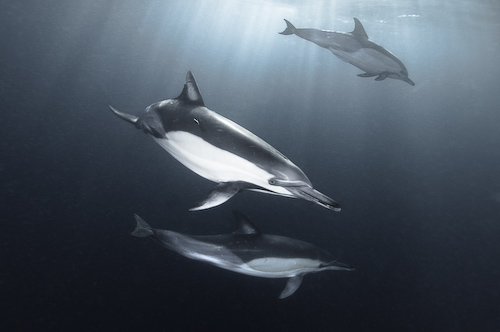 In the second half of June 2008 I was lucky to participate in the annual Sardine Run on South Africa’s Wild Coast. This area offers a lot of natural attractions in winter season, but our ultimate goal was to witness and photograph bait ball activity, which is part of  the elusive Sardine Run phenomena - the huge multi-kilometer school of sardines migrating along south-east coast of South Africa, and being chased by thousands of dolphins, sharks, birds and even whales. 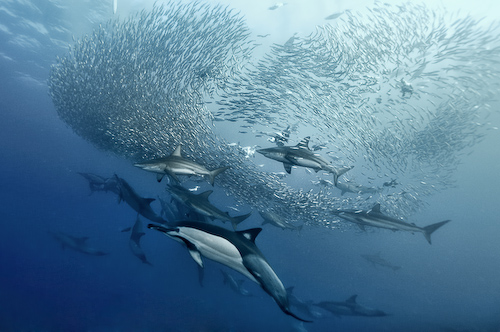 We arrived to Port St. Johns, a small town at the Umzimvubu river mouth, and stayed for 14 days. Launching from the river helped us to reduce the hassle of breaking through the surf waves, but still every launch was adventure on its own – which I quite frankly enjoyed a lot, thanks to a very skillful skipper handling the boat. You put your feet into straps and watch as the boat charges towards huge waves, climbing on them, sometimes literally crashing – it’s a lot of fun. 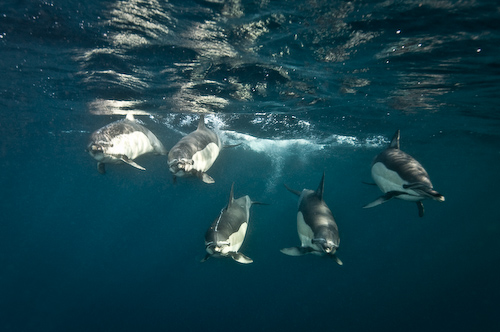 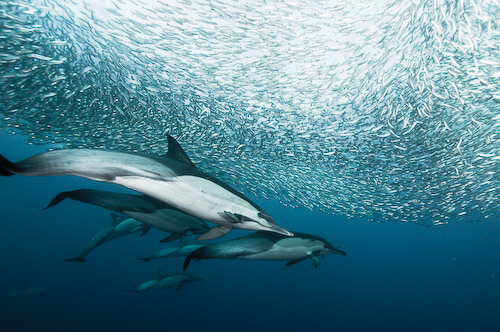 On the very first day weather was perfect and right after launch we met super pod of easily 5,000 common dolphins. We managed to snorkel with them a little bit and captured our first pictures. We also discovered several bait balls but visibility was less than 5 meters, and no diving was possible due to safety reasons – you don’t want to be close to sharks when you can’t see them well (or when they can't see you well). Regardless, top-side shooting and observing hunting birds was quite enjoyable. That evening good weather changed into storms, and for next 3 days we were sitting on land. Sea conditions became very rough and it was not possible even to think about launching. The storms caused floods, in fact the strongest in the region for  the last 20 years, and there were even several deaths among  local villagers. After  the weather pacified a bit we managed to enjoy several overland excursions to local scenic spots, very beautiful ones. I particularly liked the waterfalls and tea plantations, both are great photography subjects. 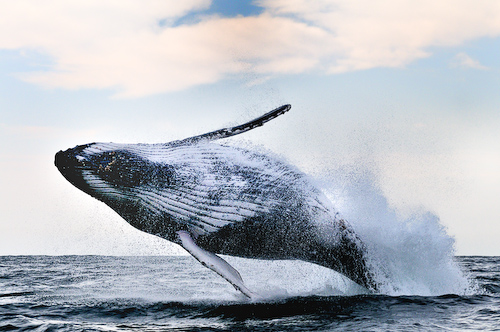 During the storms the Umzimvubu river dumped a lot of dirt from land into the ocean, killing visibility across a wide expanse, for many days. After launching was finally possible, we just enjoyed top-side action and some limited snorkeling with dolphins and whales. Bait balls disappeared. But even if we would find one, it would not be possible to dive in bad viz. However, on the tenth day we finally got into our first bait ball. It was a very small one, but saturated with predator activity. Some from our group even saw their first Bryde’s whale on that dive! Our patience finally paid off – just that one dive would have been a great reward for all thae days of waiting. The next morning we managed to dive in two more bait balls, with visibility about 7 meters. Even if viz was limited we had very beautiful bright morning light, and I consider the few successful pictures from that dive among the best in my entire collection. 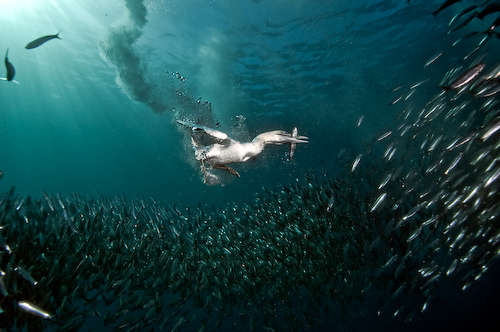 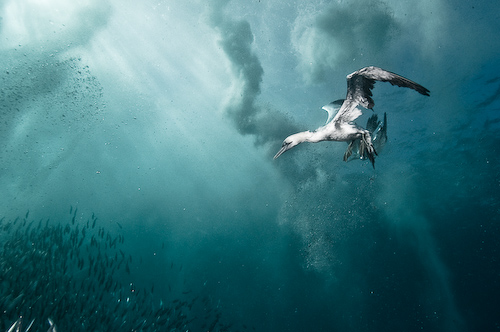 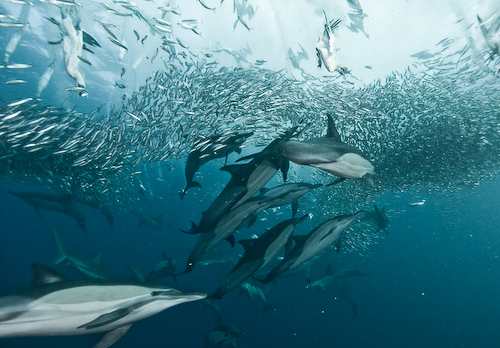 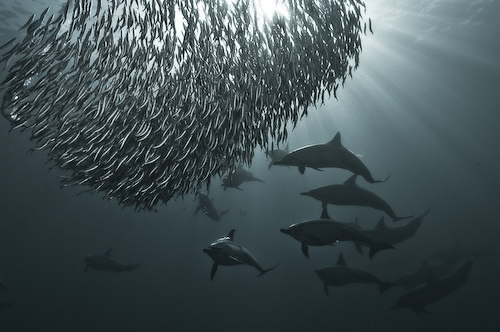 The next two days we spent chasing ghosts. While many bait ball opportunities were around, we did not manage to reach any of them on time. This highlighted again how unpredictable and demanding this event is. You need to be in the right  place at the right time when all the conditions are right, and this obviously did not happen often.

On the very last day we scored a big win. Despite bad weather and rough seas, just after launch we found a huge bait ball with 20 m visibility – conditions that are very rare. That bait ball lasted long enough for us to finish our full tanks and to capture many good pictures. Sharks, dolphins, birds – everything was in place! Even a bryde’s whale appeared, however, no one managed to get a decent capture of it due to it’s speed and unexpectedness! 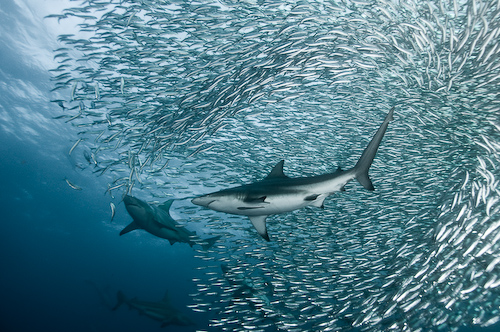 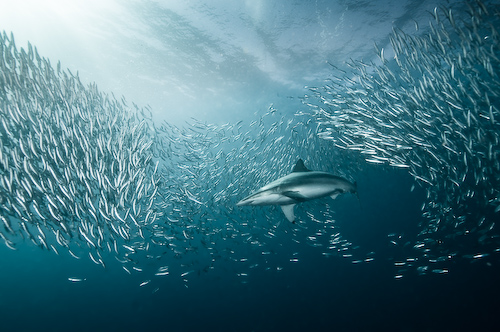 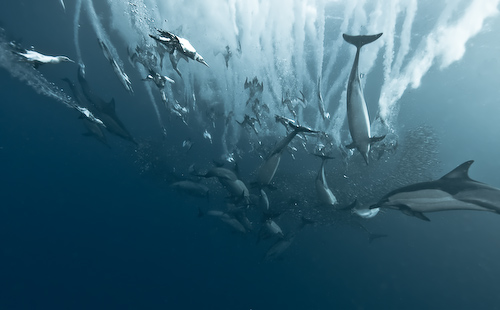 At the very end of  the dive nature presented us with fantastic gift –  the appearance of a sailfish! It was around for few minutes, and it was possible to take a few good shots in good visibility. Our patience during the previous days was rewarded again! 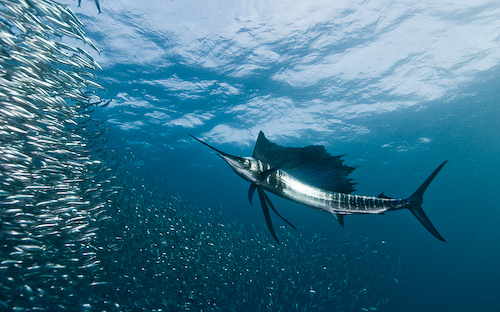 To summarize - the Sardine Run is very unpredictable. There is always something, but it is difficult to predict exactly what you will have the opportunity to encounter and shoot. The best way to approach this event is to be open minded and to be ready to improvise – and patience is important too. Some days are frustrating, but other days are full of surprises and rewards – and in my opinion these contrasts make the Sardine Run the ultimate adventure of lifetime !
Join Jason Heller on a DPG Expedition to the Sardine Run in  July 2009, June 2010 and June 2011. Space is very limited. We are running two 7 day back to backtrips, join us for one or both weeks. Details can be found here.