It is easy to get over excited by a new destination, particularly when you are one of the first to dive there. The heady cocktail of discovery and adventure skews your judgement, mix in a dash of ego massage that comes from seeing something others haven’t, and it is easy to get carried away claiming to have dived the next big thing. I’ll attempt to avoid temptation.


The blanks on the map of the underwater world are ever diminishing and usually to find somewhere new requires a series of flights on ever more rickety aircraft followed by several days steam on a liveaboard. Buyat Bay is different and this is what makes this new destination exciting. It is just a few hours drive south east of Manado, which is already a diving hub with nearby attractions such as the Lembeh Strait and off shore islands such as Bunaken and Bangka. Furthermore Manado airport is served by direct flights from both KL and Singapore. This is adventure almost from the comfort of home.


Just as important is that Buyat Bay offers something quite individual amongst North Sulawesi’s existing diving attractions. Buyat‘s distinctive DNA consists of clear waters and reefs that explode with coral growth. The hard coral here is phenomenal. Please look at the photos for I fear my words will not do justice. The reefs form steep slopes rather than drop offs so are almost continuous carpets of coral. Table corals and branching corals dominate in the shallows, giving way to lettuce corals and more massive forms with depth. Some colonies are huge. One stand (maybe Porites, actually we could not identify it in any of the books) appeared to be a single individual and was a large as a house meaning it was probably more than 1000 years old (again see the photo). 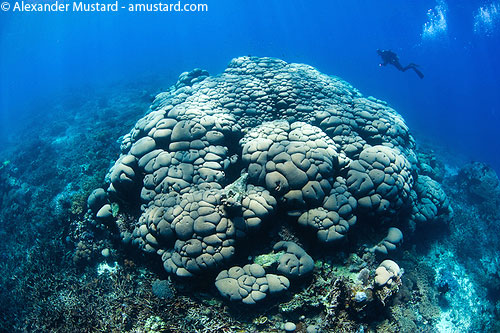 The slopes are also covered in seafans, soft corals, whip corals, sponges and crinoids all of which provide a lot of colour. Perhaps most striking is that each individual colony looks so perfect, so pristine. 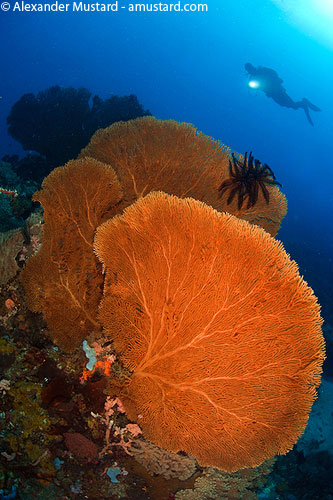 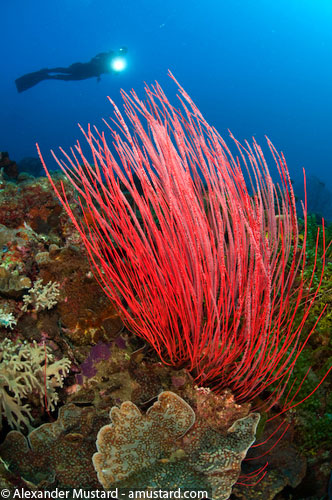 There is no diving infra-structure in Buyat Bay at the moment, but hopefully there will be possibilities in the near future. I got my chance to visit when Lembeh Resort’s Danny Charlton fired me an email asking me if I fancied a few days of exploration before a group trip I was leading to the Strait. I hastily rearranged flights and on my arrival at Manado airport I was whisked off into the unknown.

This was Lembeh Resort’s third exploratory trip to Buyat Bay in the last six month. As Danny says “At the Resort we are always looking to offer new experiences to our guests and we hope that Buyat can be one. I went down there eight years ago and always wanted to go back, but never had time. Finally, last summer I did and I was amazed. I thought “We have to show people this!” Buyat became a big ambition. It is also great for our guides. Personally, I think we have the best guides in the Strait and new projects like Buyat will keep them motivated and happy, and will encourage them to stay with us.” 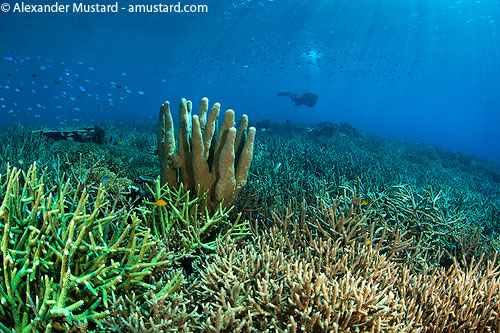 On this occasion Danny sent down a team of seven including four of his most experienced dive guides (Semuel, Paulus, Andi and Joni, for those who have been to Lembeh Resort) and expedition leader Erwin Filius, from New Zealand, who has worked extensively throughout Indonesia. The group spent 6 days doing 6 dives a day in two groups exploring at least 40 potential sites. As Erwin summarised, “Most are well worth diving, a couple weren’t up to standard and about 10, when we came up, every one of us was blown away. These are the ones we hope to take people to.” Danny and I joined them for the final full day, when we visited some of the top spots and I took photographs.


The diving is predominantly sloping reefs and coral gardens. Currents were gentle and the diving was generally was easy and very beautiful. The dives around Pulau Tulang, Tanjung Merah Muda and Pulau Racun are particularly impressive. I didn’t see much big fish action in Buyat Bay, although a stopping off point en route to Lembeh, on a dive site we christened Pay-Dirt, offered a much more high energy experience. Pay-Dirt seethed with fish and colourful soft corals and felt like one of the places where something big was just about to turn up. 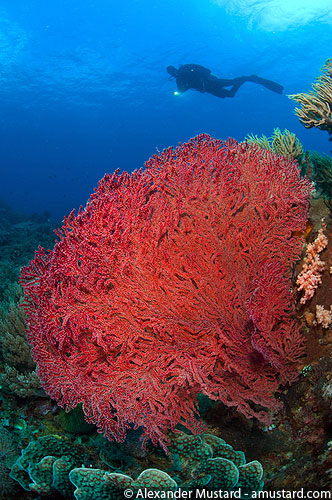 The Buyat area also has critter diving. I was taken to a new muck site, which the group had discovered the day before and called Fifty-fifty. I saw many critters (seahorses, ghostpipefish (including Halimeda type), pipehorse, dragonette, snake-eels, Ambon scorpionfish) as you might expect with 5 of Lembeh’s top guides and just me! They had seen mimic octopus on a recent dive, too. But the main attraction of Buyat Bay is how it differs from Lembeh and this means the fabulous corals. 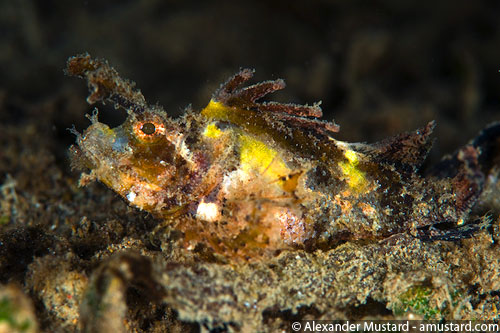 So why are these reefs in such rude health? It’s an interesting tale, and one that is not without a rather large slice of irony. There is no doubting that the vast majority of Indonesia’s waters offer perfect conditions for coral growth, yet areas like Buyat Bay are not common. This is because destructive fishing practises are widespread, and dynamite fishing, in particular, has made pristine coral gardens are increasingly rare sight. Dynamite fishing, dropping explosives onto the reef to kill and catch fish, is very destructive fishing method because it not only kills indiscriminately, but it also destroys the habitat meaning that the fishing resource is gone. It is like instead of picking mangos from your tree, you cut it down when the fruit are ripe. With the seabed broken down to rubble, it is estimated that it takes 40 years for a reef to recover to 50% coral cover. Even longer to rival the 100% coral cover you can see in the photos from Buyat Bay. 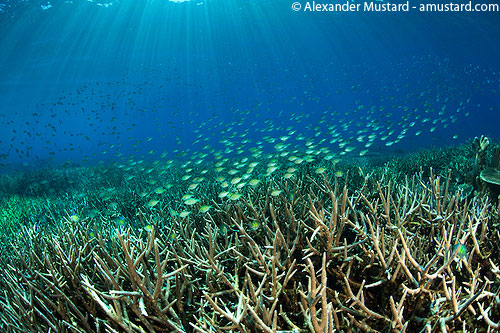 So how did Buyat escape the fate of other reefs nearby? If you type the name Buyat into Google and you won’t read about diving, but instead a gold mining operation, which attracted a fair amount of controversy while it was operational. The mine is long since closed but its presence has left a lasting impact on the reefs, which surprisingly is a positive one. First, the mining company funded a park ranger boat to patrol the area and stop illegal fishing. And since then, concerns about pollution has kept fishermen away. Left alone the reefs are flourishing. 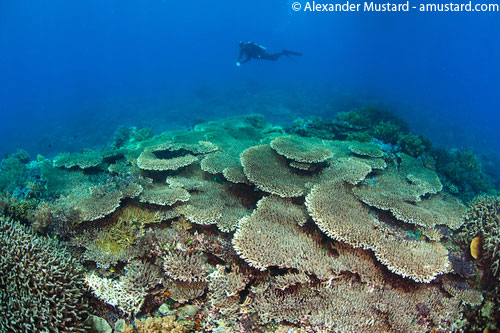 Diving in Buyat Bay is like stepping back in time. It is a chance to see reefs as they used to be. As they should be. And there-in lies the challenge for the future. In Buyat Bay we have been given a fresh chance to preserve and not destroy. As Danny Charlton said to me, “Before we start diving the area we need the ranger patrols running again. At the moment the fishermen are ignoring Buyat, but if they start seeing divers, they are going to conclude there must be fish. We plan to take $10 from every visitor and put it towards a full time ranger. We hope that if others go to the area they will follow suit.” We can only hope that this precious opportunity is taken advantage of. It was a privilege to join the team from Lembeh Resort and see Buyat Bay. 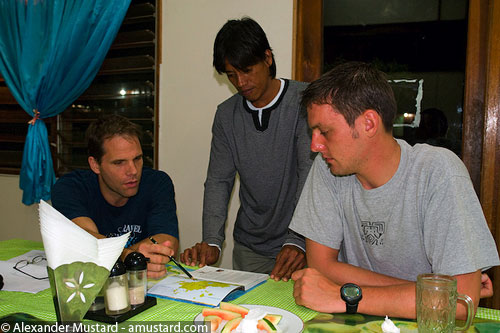 In conclusion, I don’t believe that Buyat Bay is the next Raja Ampat. It is not as impressive and it is only a small area. It is best viewed as another alternative in North Sulawesi, ideal as add-on 3 to 5 days to a trip to Lembeh or Manado. Its clear water and coral rich diving is a perfect foil for Lembeh, and certainly very different from the walls Bunaken or the current stoked reefs of Bangka and beyond. Hopefully divers will be enjoying Buyat Bay’s coral gardens for many years to come. 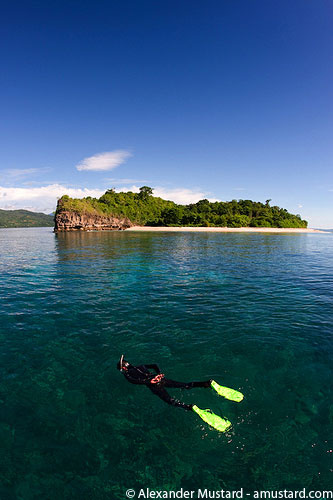