Images by Victor Zucker, except where noted otherwise

We normally avoid the overly scientific data laden articles, but this one was too interesting (and relevant to underwater photographers) to pass up. So many underwater photographers have visited or plan to visit Grand Cayman's famous Stingray City. But what most do not realize is that there are inherent problems with the massive numbers of tourists that are feeding these stingrays everyday, which is the very reason that the stingrays appear in the first place. In fact, upon further investigation, it is not difficult to even learn about some of the abuse that tourist operators (not dive operators as far as we can tell) inflict on the stingrays by lifting them out of the water for tourists to photograph. 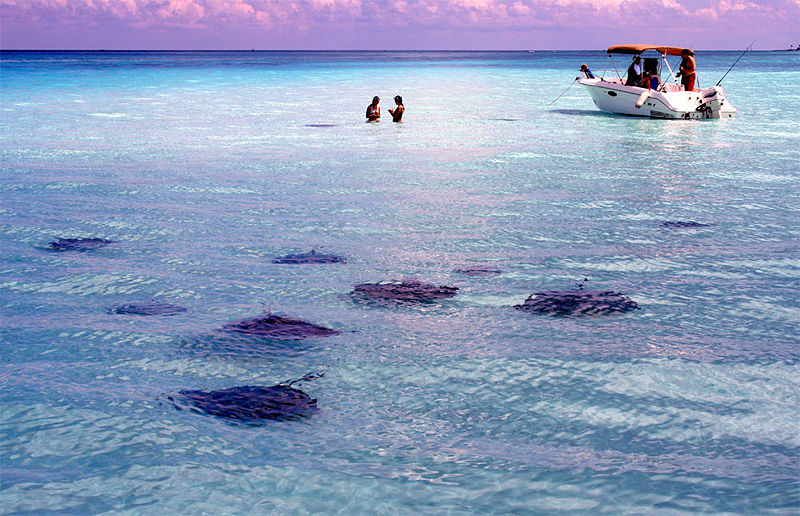 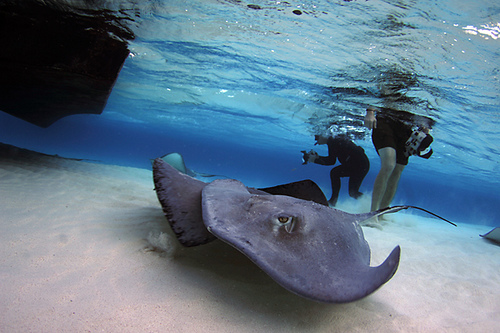 Abuse?
Over the last few years, Len Layman, a photographer on Grand Cayman who earns his living from tourist photos 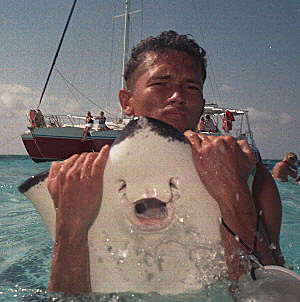 at Stingray City, voiced his concern  about this issue and even launched a website, StingrayCity.org, dedicated to promoting Stingray friendly interaction.

"On a daily basis I see the rays mistreated over and over.  Many of the offenders do not know better, some just don't care and feel they will get tipped more by doing so. Some of the people just feel that because they have done it for years that it is OK and no one can tell them different, not even the experts such as marine biologists.  There are even operators that show stingrays out of the water in their print advertising and on their web sites."

Changing Behavior & Physiology
According to a study, based on the research of a University of Rhode Island professor, tourist activity in the waters off the Grand Cayman Islands is responsible for the disruption of behaviors and an increase in the size of the female population in stingrays.

"From an evolutionary point of view, for millions of years these stingrays have been nocturnal," Wetherbee said. "Tourists start feeding them during the day and they reverse their behavior. They became very active during the day, or diurnal, which they never were before, and now they sleep all night."

Wetherbee explained that in the wild, stingrays are bottom-feeders, and do not typically eat non-natural prey items, such as squid, which many tourists have been feeding them.

"They eat a lot of invertebrates, worms and shellfish," he said. "Their mouths are on the bottom, so they swim along and dig up stuff in the substrate mostly. They do catch little fish sometimes but it's mostly invertebrates.""I was surprised that the females are a lot bigger than the males, almost twice as big," said Seifter. "With people feeding these rays, they're getting to really big sizes that they wouldn't usually grown to in the wild."

Wetherbee's research concluded that the female stingray population in tourist areas has also increased. "Over 80 percent of the rays there were females," Wetherbee said of his findings.

One of our readers, Ben Speers-Roesch, ran the fatty acid analyses on the stingrays for a separate, but related study, written by Christina A. D. Semeniuk. 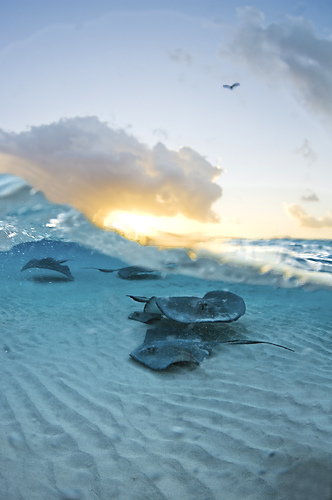 ABSTRACT: Feeding marine wildlife as a tourism experience has become a popular means by which to attract both eople and wildlife, although management efforts are still in their infancy. ‘‘Stingray City Sandbar’’ in the Cayman Islands, where visitors can hand feed free-ranging Southern Stingrays (Dasyatis americana), is a world-famous attraction currently undergoing visitor and wildlife management. One plan is to decrease the amount of nonnatural food provided by tourists with the intention of decreasing stingray habituation to the artificial food source and promoting stingray health. However, the effectiveness of this action is uncertain given that neither the extent of squid composition in the stingray diet nor the degree of nutrient similarity between the fed and natural diets is unknown. We used fatty acid (FA) profile analysis to address these questions by assessing the serum nonesterified FA composition of fed and unfed stingrays around the island and compared them with FA profiles of (1) the provisioned food source (squid) and (2) other warm- and cold-water elasmobranchs (sharks and rays). Our results indicated that fed stingrays were distinct. The FA profiles of the fed stingray population were expressly different from those of he unfed populations and showed a remarkable similarity to the FA composition of squid, suggesting that squid is the main food source. The tropical fed stingrays also exhibited essential FA ratios, specific to both species and habitat, comparable with those of elasmobranchs and squid from cold-water environs, implying that the provisioned food does not provide a similar nutritional lipid composition to that eaten in the wild. Our results suggest that FA profiles are a valuable indicator for the management and monitoring fed Southern Stingrays because they can be used to assess differences in diet composition and provide an index of nutritional similarity. Our findings are currently being used by Caymanian stakeholders in designing practical management actions for their wildlife attraction. 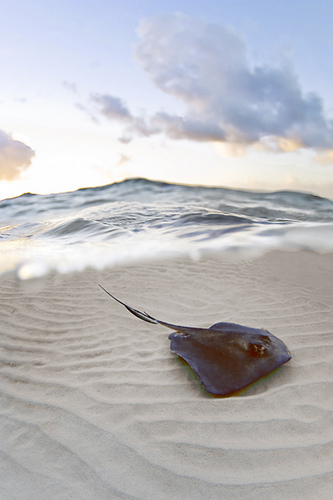 ABSTRACT: Animals can perceive tourists as predators and will incur fitness costs should their predator-avoidance behaviours result in forgone resource acquisition. Not all wildlife, however, treat tourists as predators; animals can respond positively to tourists, especially when food is used as an attractant. We investigate the costs posed by novel grouping over a tourism-provisioned food resource in a normally solitary forager, the southern stingray Dasyatis americana, in Grand Cayman. Specifically, we test the hypotheses that group-living stingrays in a new environment—which includes both the presence of tourists and quickly renewing food patches—will be exposed to increased injuries, ecto-dermal parasites and aggressive interference competition that result from the unusual grouping behaviour. We found that, in comparison to stingrays from non-tourist sites, touristfed stingrays are more likely to have lower body condition, be injured by boats and predators, be susceptible to ecto-dermal parasites, and be engaged in intense interference competition (in the form of conspecific bite marks). Stingrays from tourist sites also have significantly higher mean numbers of injuries, parasites, and median bite marks. By exploring alternative hypotheses to explain the pattern of our findings (e.g. natural causes/behaviour), we unequivocally show that the impacts incurred by the stingrays stem from the effects of tourism. These findings suggest that novel grouping poses costs to the stingrays; the tourist site represents a riskier habitat with regards to injury and predation; and there may be long-term fitness consequences. From a management perspective, measures should be taken to alleviate the crowded conditions at tourist sites, in terms of both boat and stingray density.

So, What Does This All Mean?

Does the organized feeding of marine wildlife present problems for the  local environment? As underwater photographers, we tend to participate in the feeding of sharks, dolphins, stingrays, and other species, in order to get close enough to get  high quality images. It adds to the local economies and prevents exploitation and removal of the larger species. However, it has also been proven that this activity can alter animal behavior, population levels, aggression, dependence upon and habituation to human contact, as well as malnourishment and disease.
What do you think? Chime in with comments regarding marine wildlife interaction!