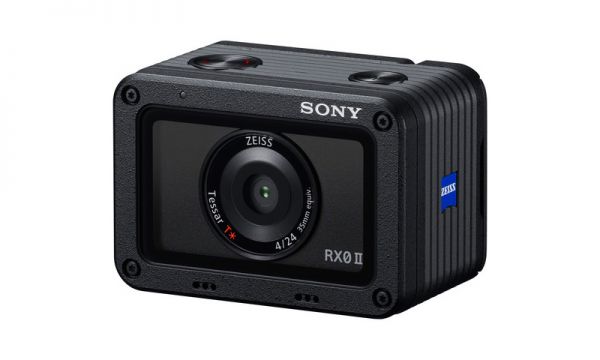 Sony has announced the RX0 II action camera—the updated version of the RX0, which was unveiled in Europe in September 2017. Like its predecessor, the new “ultra-compact” camera boasts a 1-inch-type Exmor RS CMOS sensor, which is powered by Sony's BIONZ X image processor, and a ZEISS Tessar T* 24mm-equivalent f/4 fixed wide-angle lens. A little deeper and slightly heavier than the first-generation model, the RX0 II measures 59mm x 40.5mm x 35mm and weighs 132g.

As you’d expect, the RX0 II is everything-proof: waterproof down to 10 metres (32.7 feet), shockproof up to 2 meters (6.5 feet), and crushproof up to 200 kilograms of force. Accounting for its slightly larger depth dimension, the Mark II features a more maneuverable LCD that tilts upward 180 degrees and downward 90 degrees, making it easier to see what you’re capturing when squeezed into tight spaces.

Sony’s press release below makes no mention of an accompanying underwater housing, and given the difference in dimensions between the RX0 II and its predecessor, it’s likely that the existing RX0 housing will not fit the new model. 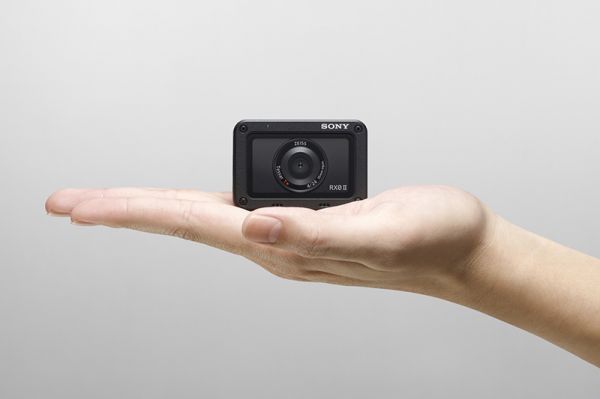 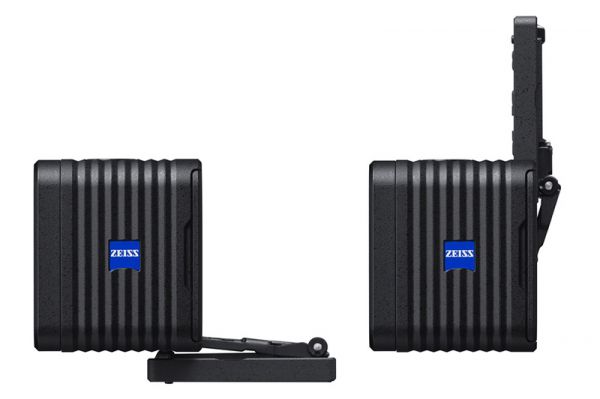 At the heart of the RX0 II sits a 1.0-type stacked 15.3-megapixel (1) Exmor RS™ CMOS image sensor and an advanced BIONZ X™ image processing engine that offer enhanced color reproduction, including beautiful skin tones. This power packed combination has been optimized to deliver lightning-fast performance and exquisite image quality for both stills and movie shooting across a wide sensitivity range of ISO 80 (11)-12800. The ZEISS® Tessar T* 24mm (3) F4.0 fixed wide-angle lens has a shortened minimum focusing distance of 20cm, making it perfect for selfies or table-top photos.

A Camera for All Conditions

“With its 1.0 type sensor, ZEISS® lens and multi-camera capability all packed in a compact waterproof body, the original RX0 was designed to enable new forms of creative expression,” said Neal Manowitz, deputy president of Imaging Products and Services Americas at Sony Electronics. “By adding a 4K internal recording, 180 degree LCD and upgrading many of the still image capabilities on the new RX0 II, we have further built upon this concept, allowing many new and different types of creators – ranging from travel photographers to vloggers – to realize the benefits of such a unique, versatile form factor.”

The RX0 II offers 4K 30p internal movie recording (4) with full pixel readout and no pixel binning to collect approximately 1.7 times the amount of data required for 4K video. By oversampling this data, the appearance of moiré and jaggies is reduced to deliver smooth, high-quality 4K footage with exceptional detail and depth. Using the recently introduced Sony “Imaging Edge™” mobile applications, this footage can be transferred to a smartphone (14), edited and shared easily across social networks. 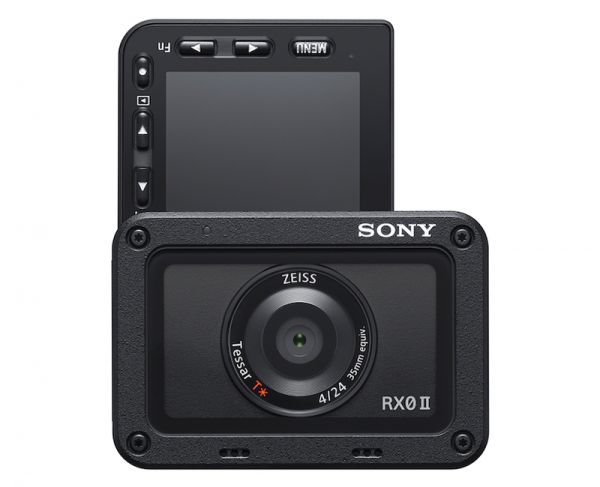 The RX0 II introduces in-body electronic stabilization (15) for steady footage, even when shot handheld. This can be enhanced even further when footage is exported to a smartphone or tablet running the “Movie Edit add-on” (16) application, where the additional information captured during filming can be processed to produce a video with gimbal-like smoothness (17). An additional new feature that can be accessed via Sony “Movie Edit add-on” is Intelligent Framing, where the selected subject is kept in the center of the frame and image distortion is corrected in a final edit. Depending on where the video will be shared, a variety of aspect ratios can then be selected.

The versatility of the RX0 II means that it offers a host of still photography features in addition to its video capabilities. It boasts an Anti-distortion Shutter of up to 1/32,000 sec. and can shoot at up to 16 fps (5) to capture any fleeting moment of emotion that passes across the subject’s face. In an upgrade from the original RX0, color reproduction has been enhanced to reproduce the natural and vivid color of human skin, and the optional Soft Skin Effect can be applied to cover minor blemishes and wrinkles. Rating and Protect functions can be applied in camera and a grouped display of continuously shot images can be viewed on the camera.

Sony’s Eye AF, which is proving hugely popular with portrait photographers across the world, has been upgraded on the RX0 II. The speed, accuracy, and operation of the Eye AF has been improved to make it even easier to capture a stunning portrait; a simple half-press of the shutter button will lock-on to the eye of the subject. The focused eye can be selected (left /right/auto) in the menu or assigned to a custom button, allowing the user to concentrate on composition.

The camera can be set for interval shooting, the results of which can be edited with Sony’s “Imaging Edge” desktop application viewer into stunning time-lapse videos (19).

Up to five RX0 II cameras can be controlled wirelessly (20) using Sony “Imaging Edge Mobile” (21) application and between five to 50 cameras will be able to be controlled via an access point (scheduled for Summer 2019). The RX0 II is also compatible with the Camera Control Box CCB-WD1 (22), which enables up to 100 cameras to be connected and controlled in a wired multi-camera setup. These multi-camera solutions unlock a whole new world of shooting opportunities and free video expression from any viewpoint that the user wishes to pursue.

The RX0 II camera will ship in April 2019 for approximately $700 US and $900 CA. The products will be sold at a variety of Sony authorized dealers throughout North America.

A variety of exclusive stories and exciting new content shot with the new camera and Sony‘s other imaging products can be found at www.alphauniverse.com, a site created to educate and inspire all fans and customers of Sony’s Alpha™ brand.

The new content will also be posted directly at the Sony Photo Gallery and the Sony Camera Channel on YouTube. Detailed product information pages within Sony.com for the new camera can be found at:

[1] Approximate effective megapixels
[2] Depending on usage conditions and circumstances, no guarantee is made regarding damage to, malfunction of, or waterproof/dustproof performance of this camera. Water and dust resistance equivalent to JIS protection level IP68. Underwater, the minimum focusing distance is increased, and the angle of field is narrower. This camera sinks in water —- please use a strap to prevent loss
[3] Converted from the angle of view (35mm equivalent)
[4] Wi-Fi does not operate. QFHD:3840×2160. A Class 10 or higher micro SDHC/SDXC memory card is required to record movies in the XAVC S format. UHS-I (U3) micro SDHC/SDXC card is required for 100Mbps recording
[5] In Speed Priority Continuous mode. Focus and exposure settings are fixed at first frame
[6] Among fixed lens digital cameras with 1.0-type sensor and tiltable monitor. As of March 2019, based on Sony research
[7] MIL-STD810G C1 Method 516.7 shock test onto 5cm plywood cleared. Applies when LCD monitor is retracted
[8] Sony test condition. Applies when LCD monitor is retracted
[9] Wireless functions cannot be used underwater
[10] When compared with DSC-RX0
[11] ISO 80, 100: when expanded. For still shooting only
[12] width x height x depth
[13] Approximate weight with battery and media included
[14] Availability of video transfer and playback varies depending on a smartphone in use
[15] For video shooting only
[16] Add-on mobile application for ‘Imaging Edge Mobile’
[17] Angle becomes narrower than the actual shot. The frame area of the picture becomes narrower than the original image. The movie footage can be rendered to up to Full HD quality
[18] Sound cannot be recorded. A Class 10 or higher micro SDXC or SDHC memory card is required
[19] Wi-Fi does not operate during interval shooting. The latest version of Imaging Edge ‘Viewer’ and PlayMemories Home desktop applications is required
[20] Not available during 4K video, FHD 120p (NTSC)/100p (PAL) video or interval recording. DSC-RX0 and DSC-RX0M2 models cannot be used with radio control at the same time. Depending on the specifications of the access point, smartphone, and tablet to be used, and the radio wave environment of the installation location, the number of devices that can be connected may change.
[21] Refer to the following page for details of compatible Imaging Edge Mobile.
[22] When using the CCB-WD1, please update your software to the latest version (Supported with ver. 2.00 or later.) Up to 100 pairs of DSC-RX0M2 and Camera Control Box can be connected, according to Sony’s internal testing 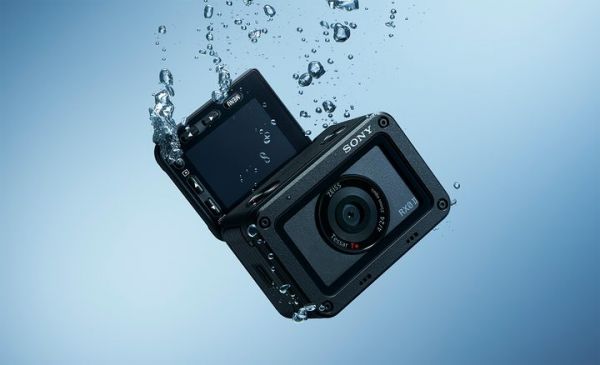