Sony Announces Plans For A Compact Interchangeable Lens APS-C Sensor Camera
By Matt J. Weiss, February 22, 2010 @ 09:33 PM (EST)
Sony created some buzz at PMA this weekend by announcing its plans for a compact interchangeable lens camera with a large APS-C sensor, which would compete with Panasonic and Olympus's Micro Four Thirds cameras.  The Sony cameras will have an APS-C sized sensor that measures 24mm x 16mm, which is larger than the Micro Four Thirds cameras.  The camera will also be able to shoot 1080p AVCHD video. Three initial lenses will be available.

This is Sony's response to Olympus, Panasonic and more recently Samsung's NX10  which are packing large sensors in small bodies.  The mock cameras are on display at PMA now in a few different colors. 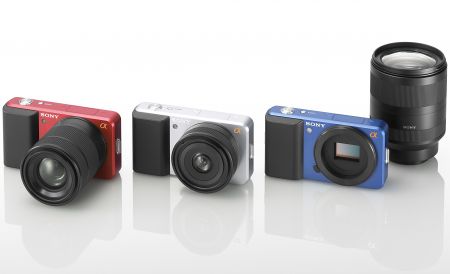 Full announcement from Sony below:

At PMA this year, Sony confirms plans to further expand the appeal of its digital imaging range. Additions to the α (”alpha”) range of DSLR cameras will be joined by a new product concept that makes high-quality imaging accessible to an even wider audience of photographers.

Shown in concept mock-up form at PMA is a successor to the α700, Sony’s acclaimed mid-range camera body that has found favour with ‘prosumers’ and enthusiasts.

New DSLR lenses from Sony
The α family of over 30 interchangeable lenses and teleconverters is set to grow with the addition of exciting new models.

Displayed as a mock-up on the Sony booth, the newest lens to carry the G Lens name is a bright, high-power Super Telephoto 500mm f/4 G with class-leading optical performance.