New DPG Editor Joanna Lentini reports from Our World Underwater in Chicago, where she presented the winners of this year’s OWU International Photo and Video Competition, hosted by DPG and Wetpixel 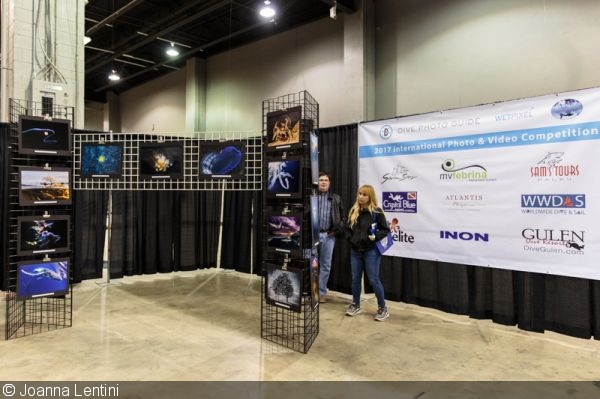 The weekend festivities for Our World Underwater kicked off at the Donald E. Stephens Convention Center in Chicago this past Friday, and despite the cold weather divers were not deterred. Aside from actually diving, the Our World Underwater dive show is an excellent way to break up the cold winter months and reconnect with like-minded people, learn about new dive/photo gear, and perhaps even book your next dive trip.

The 12th annual OWU International Underwater Photo and Video Competition selected 25 winning images, which were on display for show attendees throughout the weekend. The competition, which is part of the Underwater Competition Series consisted of six categories and had thousands of entries. This year’s judges were pro photographers David Doubilet, Dr. Alex Mustard, and Keri Wilk, Backscatter owner Berkely White, and Wetpixel Associate Editor Abi Mullens. 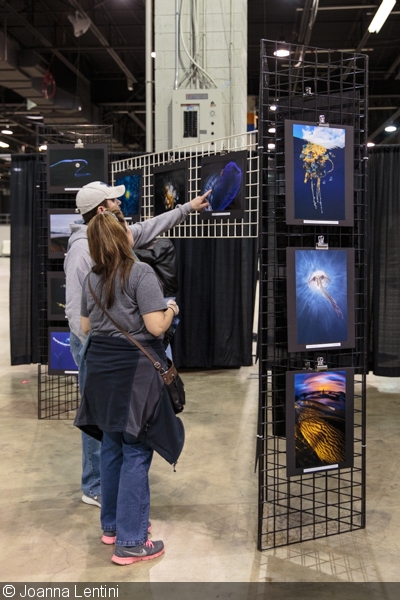 The winning images were an immediate attraction for attendees

Party with a Purpose

OWU’s first ever “PARTY with a PURPOSE” benefited the SUDS program, which teaches wounded service members to dive to facilitate rehabilitation. During the Friday night party, guests previewed a slideshow of the winning images from the OWU imaging contest as well as the winning video, Aliens of the Lembeh Strait, by Sascha Janson. 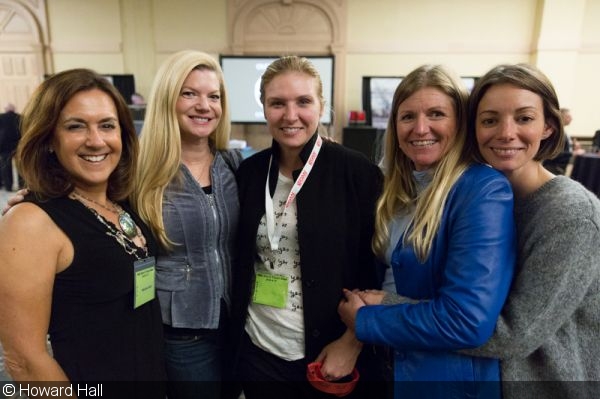 Renee Capozzola, who won Silver in the Wide Angle Unrestricted category and scored an Honorable Mention in the Wide Angle Traditional category, poses for a photo with Michele Hall, Annie Crawley, and DPG Editor Joanna Lentini 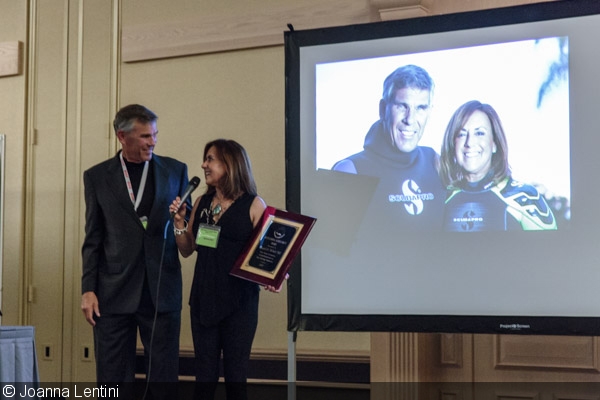 With so many exhibitors it can be overwhelming to know where to go first. Some of this year’s exhibitors included SeaLife Cameras, Backscatter Underwater Video & Photo, The Arenui Liveaboard, Kraken Sports, and Sam’s Tours Palau. 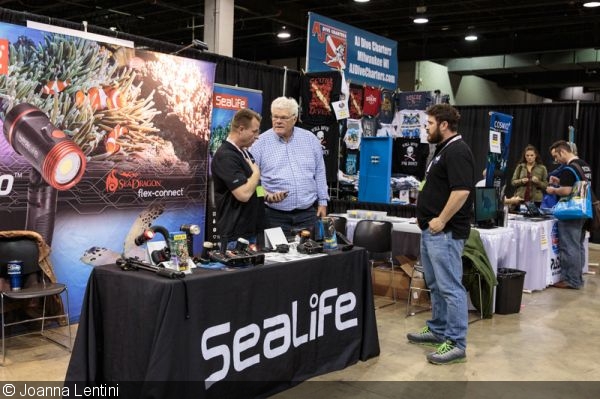 SeaLife gears up for the large crowds 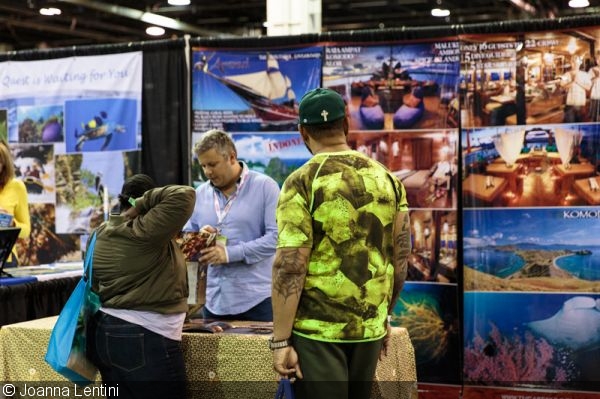 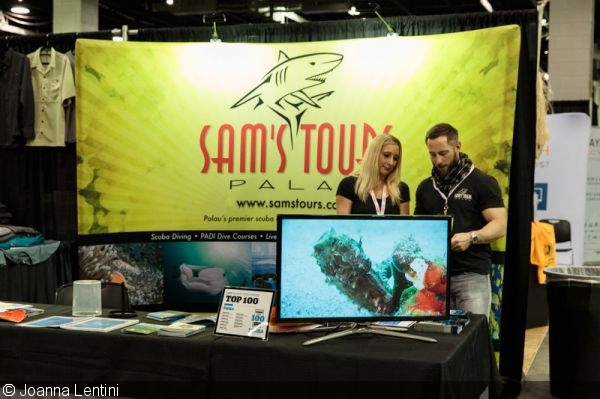 Wandering around the show floor, I had a chance to stop by and chat with Backscatter about their hot new FLIP5 Filters for the GoPro HERO5, which includes a nifty tool for easy removal of the front port. 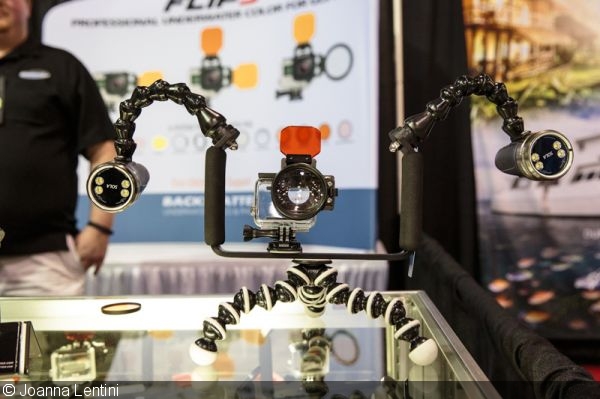 The FLIP5 system for the GoPro HERO5 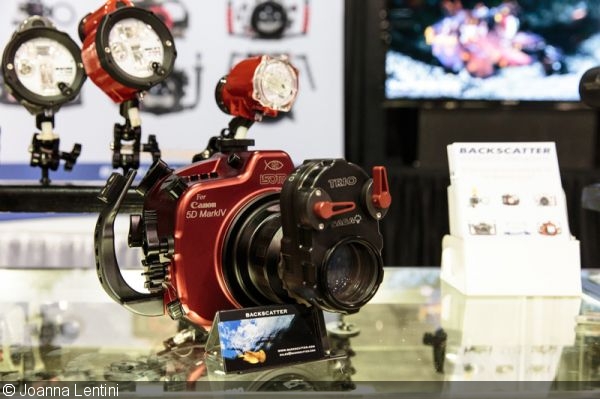 I also had a chance to check out the revolutionary Saga TRIO close-up macro lens system on this handsome, red Isotta housing. The Saga TRIO fits any housing with a 67mm thread and has magnification capabilities ranging from +5 to +15! Both the housing and lens system are available at Backscatter. 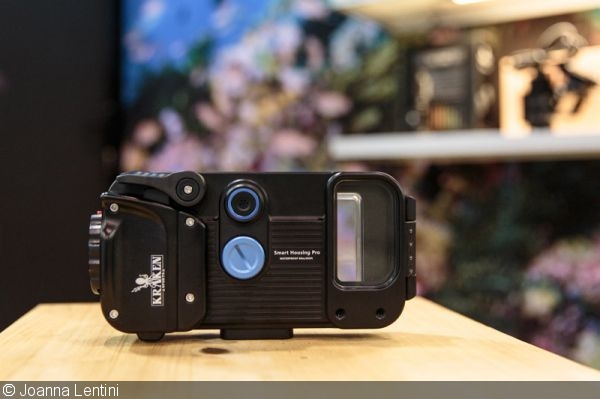 As you can see it was another eventful year at Our World Underwater. DPG hopes to see you at the next big dive show, Beneath the Sea, in New Jersey, this March! 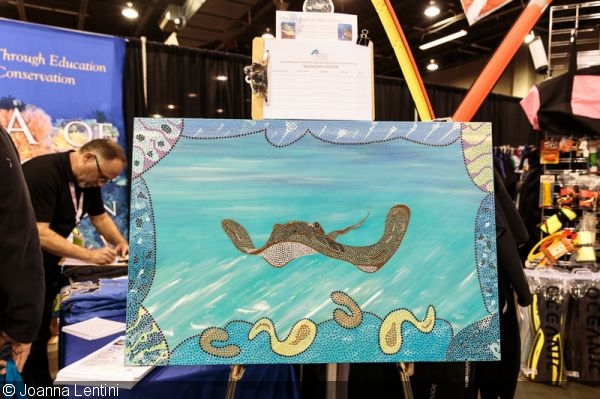