The Shell Wildlife Photographer of the Year competition announced winners today. Winners can bask in the glory of winning one of the world's most pretigiousawards in wildlife photography. The 2007 exhibition is open from 26 October 2007 to 27 April 2008 at the Natural History Museum in London.

Congratulations to the several DPG featured photographers who placed in the 2007 prestigious Shell Wildlife Photographer of the Year Competition. 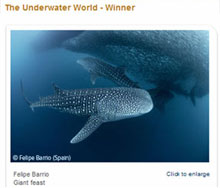 Although we congratulate all the photographers who won and placed in all categories, we are especially proud to see some of our featured photographers at work.

The Shell Wildlife Photographer of the Year Competition is owned by the Natural History Museum and BBC Wildlife Magazine, and is sponsored by Shell.