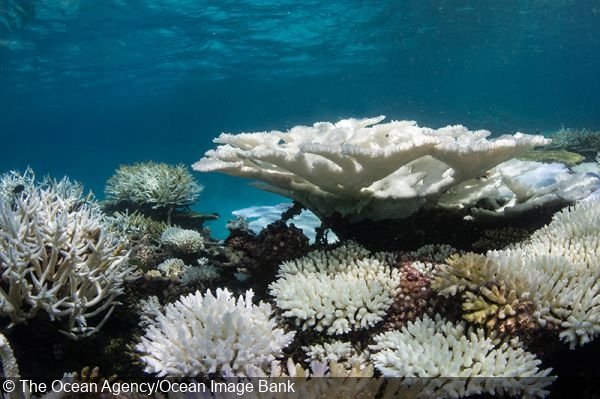 Ocean temperature isn’t the only factor affecting reef health—light also plays a significant role in coral bleaching. That’s the conclusion of a recent study by researchers from the University of Guam published in the journal Marine Biology Research. “Usually, people talk about temperature as a cause for bleaching,” said Assistant Professor Bastian Bentlage, the supervisor and co-author of the study, “but we show that both light and temperature work together.”

The study looked at the resilience of staghorn corals—one of Guam’s dominant reef-builders—to elevated water temperatures. The research team used coral samples from Guam’s Hagåtña reef flat and examined their health in the lab under normal and heightened temperatures. The corals were found to take three weeks to recover after a weeklong heat stress event. The experiment was then repeated but the corals were given shade.

“We found that when we put the shading over coral with increased seawater temperatures, it greatly increased photosynthetic yield of the symbiotic algae,” said lead author Justin T. Berg. “Shade made a huge difference for coral health when you have high temperatures.”

While shading is a practice already employed in coral nurseries, shading whole reefs in the ocean isn’t practical, so other ways to reduce the impact of light on corals need to be found. The study also has implications for finding the best locations to successfully outplant corals.