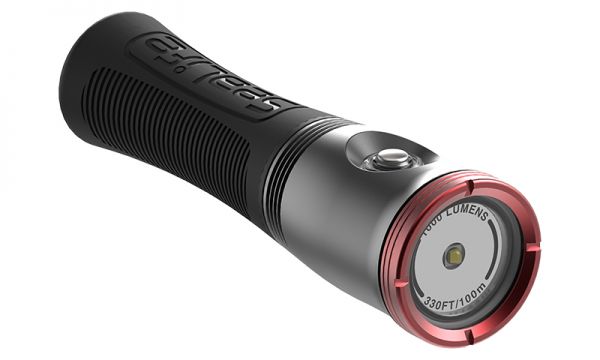 SeaLife has complemented the release of the Sea Dragon Mini 1300S dive light with another new member of its Sea Dragon line of compact handheld lights—the Mini 1000F. Where the Mini 1300S has a narrow, spot beam (6° underwater), the Mini 1000F offers a wide, flood beam with a beam angle of 98° underwater (130° above water) that allows it to do double duty as a dive light and photo-video light.

Like its spot-beam sibling, the new light is made of anodized aluminum alloy and is depth-rated to 330 feet. It also has the same single-button operation with five modes: full, half, and quarter power levels; a one-second flash mode; and an emergency SOS mode. Burn time is again two hours at full power, four hours at half power, and eight hours at quarter power.

Unlike the Mini 1300S, the Mini 1000F is designed to be either handheld or mounted—and a YS mount adapter, GoPro adapter, and AquaPod adapter are all included.

The Sea Dragon Mini 1000F is shipping now and is sold with battery and charger for $150.

MOORESTOWN, NJ – SeaLife has introduced the new Sea Dragon Mini 1000F light. Featuring 1000 lumens, the compact imaging and dive light offers users tremendous brightness and a wide 130° beam. The light can be handheld, or mounted to an arm or camera adapter with its included YS adapter mounting accessory kit.

All light functions are easily accessible with one handed operation to cycle through five light modes. The five light modes are: full power, half power, quarter power, one-second flash signal and emergency SOS signal, both at full power. The light’s power and mode button also features a battery charge level indicator, which illuminates from green, to amber, to red when batteries charge is depleted.

The Mini 1000F light is constructed of an anodized aluminum machined body for maximum durability and corrosion resistance. The dual O-ring design ensures reliable waterproof seal down to depths of 330ft/100m.

The light runs for 8 hours on one 18650 rechargeable Li-ion 3500mAh battery at quarter power, 4 hours at the half power setting, or 2 hours at full power. Two single-use CR123 may also be used with 4 hour run time at quarter power and 1 hour at full power. The battery grip features an integrated safety pressure release valve that relieves internal pressure built-up in the event the battery becomes damaged or overheats. The light is sold with an included 2600mAh Li 18650 rechargeable battery and USB charger.

The compact Sea Dragon Mini 1000F Photo/Video & Dive Light will easily slip into your BCD pocket. The light may also be mounted to camera systems with its included YS mount adapter, GoPro camera adapter, and AquaPod underwater camera pod adapter. A wrist lanyard with a BCD-clip is included allowing divers to secure the light to their wrist or clipped on to their BCD D-ring. The Sea Dragon Mini 1000F also contains two spare O-rings and O-ring lube.