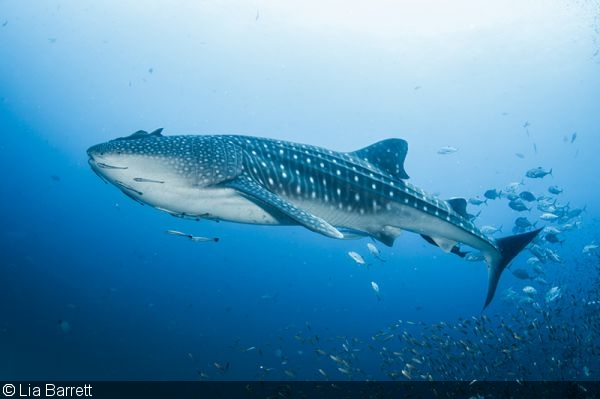 Weighing an average of 20 tons and growing to around 60 feet in length, whale sharks are the world’s largest sharks and also the biggest fish in the sea, so you would imagine that these gentle giants live a very long time. But just how long, scientists have yet to reliably ascertain. That may now change with the novel use of an established method to determine age: As detailed in new research published in the journal Frontiers in Marine Science, it involves atomic bombs.

Atomic tests conducted between 1955 to 1963—by the U.S. among other countries—roughly doubled the atmospheric content of carbon-14, a radioactive isotope of carbon, which has subsequently been absorbed by all living things on the planet. Because we know the rate of decay of the isotope, so-called bomb-pulse dating can be used to estimate age and growth of whale sharks. The spike in carbon-14 is incorporated into sharks’ vertebrae.

In the study, the researchers used vertebral samples from dead whale sharks collected in Taiwan and Pakistan. The latter was found to be 50 years old, and as it was only 33 feet long—about half the size of the largest-known whale sharks—the technique clearly suggests that these filter-feeding behemoths do indeed have a very long life span. “The absolute longevity of these animals could be very, very old, possibly as much as 100–150 years old,” says Dr Mark Meekan from the Australian Institute of Marine Science in Perth, Western Australia, one of the study’s authors. “This has huge implications for the species. It suggests that these things are probably intensely vulnerable to over-harvesting.”

Precise determination of age could help conservation efforts since the work can help scientists assess the health of a population, which would in turn inform a decision on whether fishing should be allowed in a particular location.