Rick Morris, Census of Marine Life, Joins DPG Video Team
By Jason Heller, October 31, 2008 @ 02:00 AM (EST)
We are proud to welcome Richard ("Rick") Morris to the DPG team. Rick will be providing  ongoing video content from the field where he works as a videographer for the Census of Marine Life.
Richard Morris 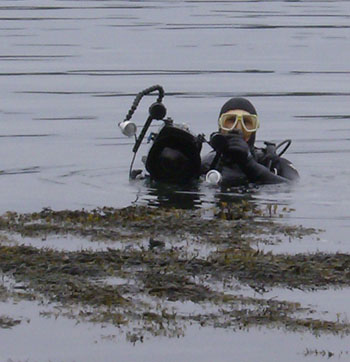 With more than 25 years in television and 40 years of diving, 20 as an instructor, Rick Morris now works as the resident documentary producer/cameraman for the Census of Marine Life.  Calling his position “the ideal job of a lifetime”, Rick has been shooting and producing pro-environment documentaries for the last 7 years and he focuses on aquatic themes.  Rick began shooting underwater when he signed on to a scientific expedition searching for fluorescent coral proteins on the Great Barrier Reef.  He pitched the idea to a friend who was producing a genetics series for PBS and “the rest”, as they say, “is history”.  Once back from Australia he purchased his own TV gear and founded Eclipse TV Production.

Rick has produced projects for PBS, National Geographic, The New England Aquarium, The Nature Conservancy, Oceana, The International Fund For Animal Welfare, The University of Connecticut and numerous other non-profit organizations.  He also lectures at industry conventions and for clubs, civic organizations and educational institutions.  Rick also produces the underwater series “Infinite Oceans” and “Adventures In Inner Space”.