Remembering The 2004 Tsunami
By Jason Heller, December 29, 2007 @ 02:00 AM (EST)
Editor's note: As many of our regular readers are aware, Wendy and I were diving in the Similan Islands in the Andaman Sea when the 2004 Boxing Day Tsunami hit Thailand. We remember the devastation all too well. The experience humbled us forever. Each year we reflect on the lives lost and the families destroyed throughout the entire region. Rather than recap the story - our coverage of the aftermath in Phuket and Kao Lak was published in Asian Geographic Magazine. The NY Post and Newsday reported our experience just days after the tsunami, as was a more detailed version on Wetpixel (this was before DPG even launched). Our thoughts and wishes go out to the survivors and the families of those lost.

We were inspired by a video from one of our members, Lawrence Alex Wu, who participated in the post-tsunami reef cleanups. So we asked Alex if he would write a few words about the experience. We are pleased to offer this unique glimpse into the response of dive teams helping to clean up and restore the reefs in Thailand. 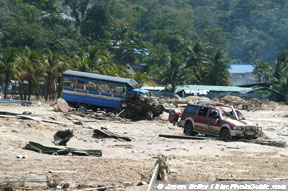 One day, one quake, hundreds of thousands killed, and an uncountable amount of damage incurred, on land and underwater. But what was unstoppable proved likewise for the spirits of 500 plus Thai volunteer divers recruited by the Thai Ministry of Natural Resources (MNR).

Thai seas were hit seriously after the Tsunami of 2004, but within a couple weeks of the December 26th date, Government and volunteers had already assembled together for cleanups throughout the Andaman Seas. After work on a Friday, trying to sleep on an overnight bus ride from Bangkok to the Andaman Sea was just the start... 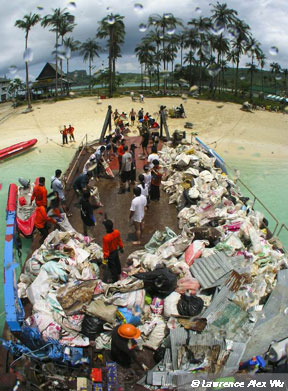 On arrival early Saturday morning, 80 plus divers would roll out onto a pier to dive as many times as the compressors could fill the tanks over the weekend, only to board the bus Sunday evening to arrive back in time for a shower at home and then to start work again in Bangkok on Monday morning.

For many of these divers, this was their weekend routine for 3-4 weekends a month...for 4 consecutive months. Tiring to say the least. But the spirit of the divers was enthusiastic and energetic every weekend. Over the 4 months of cleanup, each weekend covered a location from as far north as the Burma border to the southern reaches of Trang, Hin Daeng and Hin Muang. In the end, the amount of land debris collected just after the Tsunami totaled over 24,000 tonnes.

Towards the end of the Tsunami cleanup project that was carried out by the Thai Department of Marine and Coastal Resources (DMCR), the last phase was to have the volunteer divers transplant over 2000 nurseried Giant Clams, an endangered species, back onto the reefs to promote the rejuvenation of the reef system. Giant Clams prevent the occurrence of fish toxins and influence the reef in other positive ways. They are also considered indicators of reef health. Since that time, this department has released over 1000 Giant Clams every year all throughout Thai waters with the continual help of regular volunteer divers.

Three years now after the Tsunami, the damages to the coral reefs have fully recovered with the help of all the volunteers who united in efforts, spirits and comradery. And with the support of regular divers like you and continual monitoring and cleaning of our oceans, Thailand's coral reefs remain one of the country's prized natural wonders.
View Alex's Video