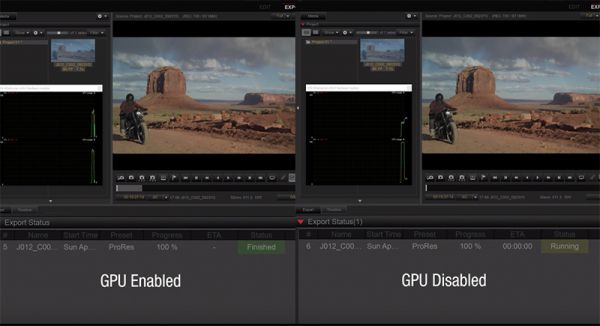 REDCINE-X PRO—RED’s application for playback and transcoding of RED RAW R3D footage—is officially out of beta, and the software now supports real-time redcode decode with compatible NVIDIA hardware. RED has also released the SDK at the same time, so other editing and transcoding software should see better .r3d playback with NVIDIA cards in the not-too-distant future.

These are the first fruits of the RED and NVIDIA partnership that was announced in October 2018. Prior to this, the processor-intensive decoding had to be done on the CPU or you had to purchase the $7K RED Rocket-X accelerator card for your PC. With the new software, decoding is passed to the NVIDIA GPU.

The bad news for Mac fans and users of the Blackmagic eGPU external graphics processor is that these are AMD platforms; the new support only applies to NVIDIA graphics cards. As such, for now at least, only Windows machines will provide for native 8K playback.

For a detailed explanation of the new technolopy, check out RED’s video below. Follow the link on the REDCINE-X PRO page to download the latest version.