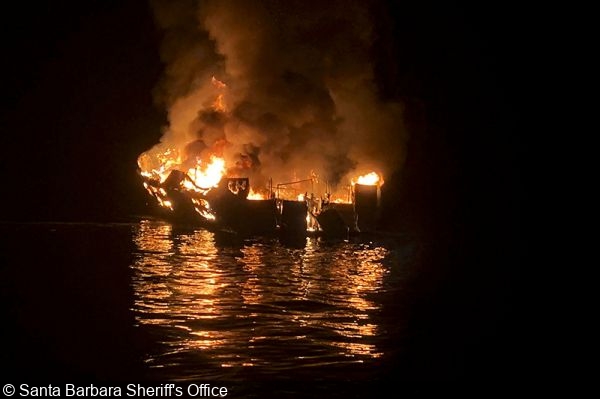 The National Transportation Safety Board has published its preliminary report on the deadly fire aboard the Conception liveaboard. The short report summarizes the tragic events of Monday, September 2nd, that claimed the lives of 33 passengers and one crewmember. The source of the fire has not yet been determined.

The report says that interviews with three of the five surviving crew revealed that “no mechanical or electrical issues were reported” and upon investigating the engine room, the crew “saw no fire.” The report also confirms that investigators have gathered documents from recent Coast Guard inspections and studied the Vision, another Truth Aquatics vessel similar to the Conception.

According to the report: “Investigators plan to examine current regulations regarding vessels of this type, year of build, and operation; early-warning and smoke-detection and alarm systems; evacuation routes; training; and current company policies and procedures.”

On Wednesday—the same day that the final victim of the accident was recovered by divers—the Coast Guard issued a Marine Safety Information Bulletin (PDF) recommending that owners, operators, and masters of passenger vessels immediately complete the following: 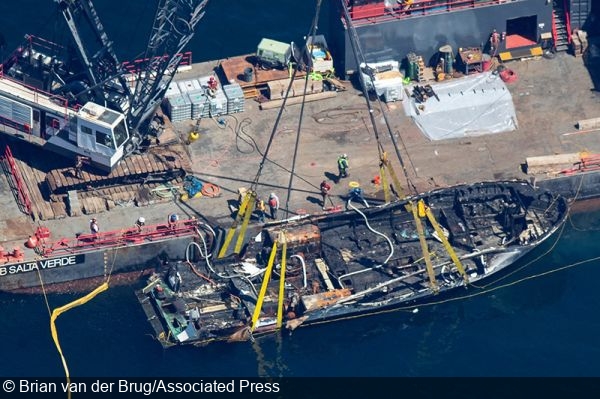 The developments came as the authorities finally raised the remains of the Conception on Thursday. The recovery operation had been hampered by bad weather for a week. A huge crane slowly hoisted the vessel onto a barge: The blaze destroyed the entire superstructure that made up the wheelhouse and middle deck, with only the sides of the middle deck area remaining intact.

It is expected that the remains of the boat will be taken to a naval facility, where investigators from the U.S. Bureau of Alcohol, Tobacco, Firearms and Explosives will examine power, fuel and electrical systems in an effort to determine where the fire originated. It has been suggested that the blaze may have started at a charging station used by guests for phones and cameras: Conception’s designer told the Los Angeles Times that he believed the fire began in the belly of the boat and involved lithium battery chargers.