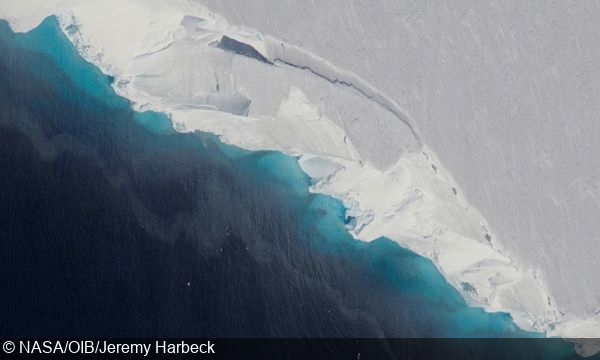 A new study published today in the journal Nature Geoscience suggests that Antarctica’s Thwaites Glacier, which is eroding along its underwater base as Earth warms, could rapidly retreat in the near future. The demise of the so-called “doomsday glacier”—which is bigger than the state of Florida—has the potential to add several feet to global sea levels. However, Thwaites is only a small part of the West Antarctic ice sheet, which, according to NASA, contains enough water to raise sea level by as much as 16 feet.

Analyzing the historical retreat of the glacier, the study’s authors found that the base of the glacier dislodged from the seabed and retreated at a rate of 1.3 miles annually—at some point in the past 200 years, possibly as recently as the mid-20th century. The current rate of retreat is half that, but the finding indicates that a similarly fast retreat could potentially occur in the coming years, with disastrous consequences.

“Thwaites is really holding on today by its fingernails, and we should expect to see big changes over small timescales in the future—even from one year to the next—once the glacier retreats beyond a shallow ridge in its bed,” said Robert Larter, a marine geophysicist and one of the study’s co-authors from the British Antarctic Survey, in a news release.

While scientists have been concerned about the Thwaites Glacier since the 1970s, more recent work has focused on the Thwaites Ice Shelf, which holds the ice back from flowing freely into the ocean. A 2021 study showed that the shelf could shatter within five years. Both studies suggest the idea that change is occurring slowly in Antarctica is false.