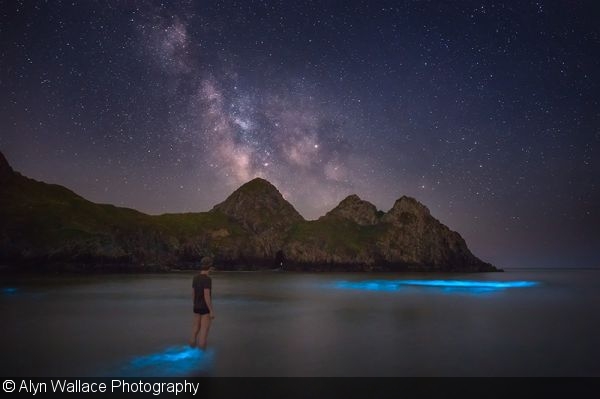 Alyn Wallace, a photographer based in South Wales, has posted on Facebook an amazing image of the sea glowing an otherworldly blue, describing it as “one of the most incredible experiences” of his life. Captured on the night of June 18, the photo shows the bioluminescent glow from tiny plankton. “Every step and splash I made just lit up with an unreal blue glow,” Wallace wrote in his Facebook post.

Bioluminescence isn’t often observed on land, but in the sea, it’s standard practice: A study published in the journal Scientific Reports reported that three-quarters of ocean animals glow. For plankton, blue is the most common color for this bioluminescence; blue light travels furthest through water. They use bioluminescence to ward off predators—hence the glow captured by Wallace that occurred when stepping and splashing in the water.