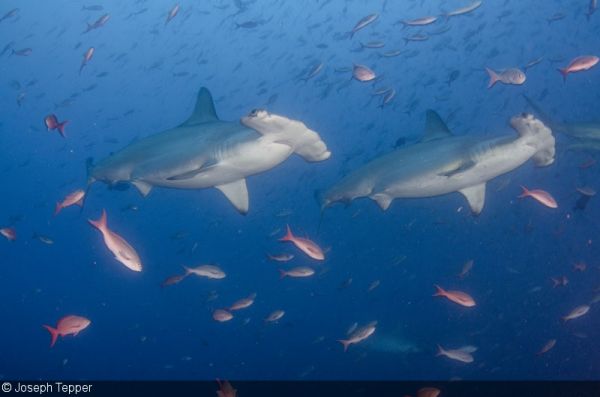 There’s nothing quite like a long road trip. And what’s more crucial to some highway cruisin’ than a good snack? That’s exactly how scientists first documented a 500-mile-long “shark highway” that runs from Costa Rica to Galapagos.

Researchers sponsored by the Pacifico Foundation used fish-baited GoPro systems – called “"baited remote underwater video systems” – in hopes of catching the sharks travelling in the corridor. While electronic tags had confirmed that sharks occasionally traveled southwest to the Galapagos, the scientists needed visual evidence to encourage the proper environmental protection.

The research vessel dragged the GoPros in tow for more than two weeks before a startling discovery: Countless sharks of several species traveled the highways with a variety of other marine life.

"We actually documented over 16 species of sharks and fish, also sea turtles and dolphins,” said team biologist Mario Espinoza. “It's really surprising to see that many animals."

The sharks videotaped were largely hammerheads, but thresher and silky sharks were also present. The animals used seamounts to navigate their way to the Galapagos, much like road signs along the highway.

Scientists hope the discovery will lead to more protection for the sharks and other marine species. While Costa Rica’s Cocos Island and the Galapagos have strong marine protection, the stretch of water in between remains vulnerable.

“Finally we have visual evidence that there is a huge abundance in this area that needs to be protected,” Zdenka Piskulich, president of the Pacifico Foundation told NPR. “There really is a highway.”