The 37th annual Our World Underwater show took place in Chicago on Feb 9-11, 2007. Despite the cold weather, exhibitors and divers came out in droves to the expansive expo, workshops and film festivals. 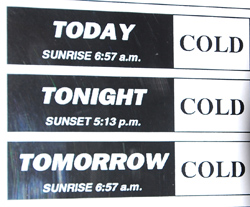 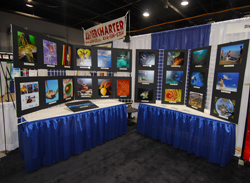 Winning images and videos can be seen on the official competition website:
www.UnderwaterCompetition.com. 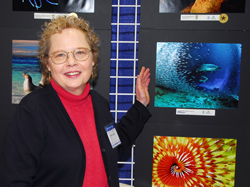 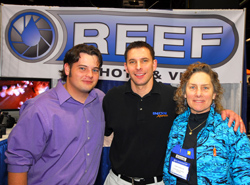 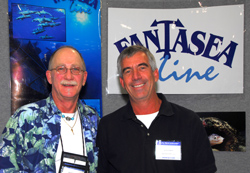 A rep from Helix Camera (Chicago) and Rand from Fantasea. 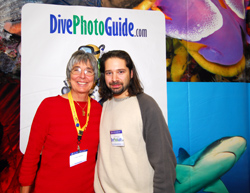 Cathy Church travelled to freezing Chicago from warm and sunny Grand Cayman to give a few workshops on underwater photogra[hy. Cathy also just launched a new dive boat for private and small group workshops in Grand Cayman. Looks like great new option with a fantastic photographer and teacher.

Cathy is featured in the DPG galleries. 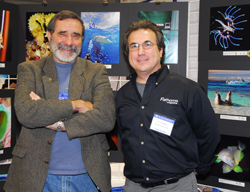 Emory Kristof is also featured in the DPG galleries. 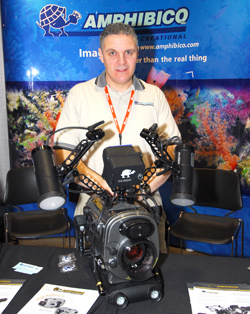 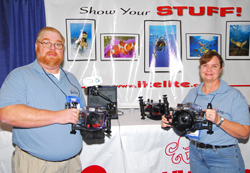 The Ikelite booth is always a popular spot on the show floor. Bob & Rhonda take a moment to show off some of the popular housings. 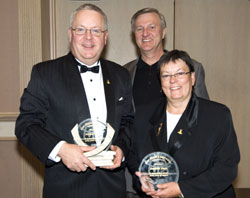 Michele & Danielle Gilbert gave a fantastic "musical imagery poem" on Manatees, and were also presented with a special award for their ongoing support and involvement in the Our World Underwater show. Their Manatee show was touching and the best I've ever seen on the subject.

The gentleman in the background is Dennis Gagnon. Dennis organizes the film festival and puts on a great show. 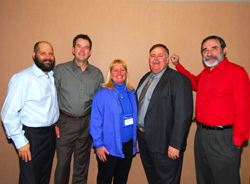 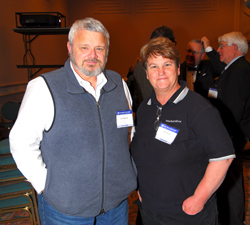 Jack & Sue Drafahl were running digital imagery and photoshop workshops throughout the weekend. 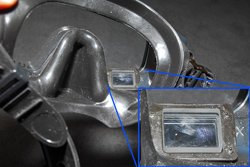 I had to check out the Oceanic HUD mask. This mask integrates a wireless air integrated computer into an non-intrusive area in the lower right hand corner of your mask.You never have to take your hands off your camera to check your gauges again. Pretty cool! 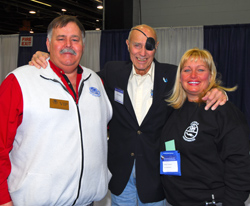 Pat and Sherry Hammer, legendary film maker Stan Waterman and I were discussing the plight of the oceans and marine ecosystems after being touched by the Gold Video winner "Unnatural Selection" from Blue Sphere Media the night before. The 60 second film covered the rampant shark finning problems in Raja Empat.

Watch the Saturday night film festival presentation of the winning images and videos here. Special thanks to Joe Hoelley from MarineVisions.com for putting the presentation together for us!