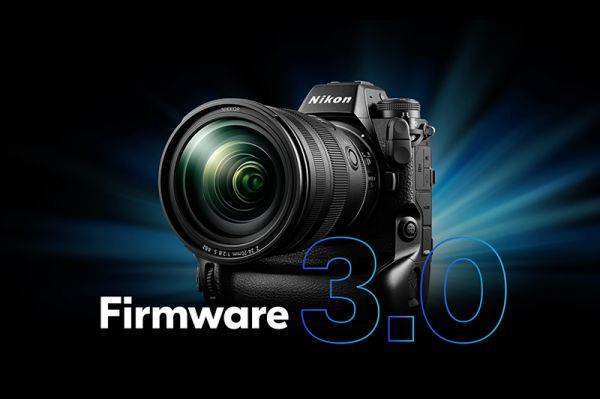 Nikon caused quite a stir when it released firmware version 2.0 for its Z9, with major updates including the ability to shoot 8K/60p and 4K/120p video in N-RAW, a pre-buffer option when shooting continuously (JPEGs only though), and a 120fps viewfinder refresh rate mode. Now the company has unveiled firmware version 3.0, which is free to download from Nikon’s website, and it’s another big one—though most improvements are more relevant for topside shooters.

Underwater photographers will be most interested in the enhancements Nikon says have been made to autofocus. Low-light performance has been improved by 0.5EV while the 3D-tracking mode is also improved, with stickier subject tracking and better tracking of fast-moving animals when using “animal” subject detection. It’s also now possible to change focus points to red, instead of white, for better visibility against light subjects.

Underwater videographers may find a creative use for the new High-Res Zoom mode, which gives 4K shooters a 2x digital zoom that can be controlled using Fn1/Fn2 custom buttons, left/right buttons on the multi selector, or the Fn ring or control ring on compatible lenses. It works by allowing the Z9 to begin capturing oversampled 4K video from the full width of the sensor and then slowly cropping in until, at 2x zoom, it is capturing the 4K APS-C 1.5x crop section of the sensor.

Other upgrades in this firmware version include a new C60 Mode for continuous shooting, which captures 19.4MP images at 60fps in DX mode (in-between the C30 and C120 options); High-Frequency Flicker Reduction mode for video; the ability to customize more buttons (including the Record button); and an Auto Series Playback function for automatically playing back multiple frames from a single burst.

Firmware version 3.0 is free to download from Nikon’s website. Check out the press release and the video below.

MELVILLE, NY (October 26, 2022)- Nikon Inc. has announced yet another substantial update for the Nikon Z 9, bringing more powerful performance and added features to what’s widely regarded as the most capable full-frame mirrorless camera available. Now available for free download, the firmware 3.0 update is the second major update to the Z 9 this year, adding enhancements to video and photo capture, usability, operability, autofocus and so much more.

“Firmware 3.0 not only demonstrates Nikon’s commitment to addressing our customers’ needs, but also our continued support to update products to their full potential for the benefit of our users,” said Jay Vannatter, Executive Vice President, Nikon Inc.

Both video and photo shooters as well as creators will see impressive benefits from the new firmware with this update. Some of the more notable features include a new Hi-Res Zoom function¹, which provides the effect of additional optical zoom for 4K video, and a new C60 High-Speed Frame Capture+², enabling 60 fps still shooting in DX-format. Firmware 3.0 also includes enhancements to the AF as well as upgraded display and operability, such as increasing the number of buttons that can be used as custom controls.

Starting today, Z 9 owners can visit the website here to download firmware 3.0 for free. Nikon will continuously meet users’ needs through firmware updates that expand the functionality of its cameras.

¹ Hi-Res Zoom is available only with video recording in the following codecs: at ProRes 422 HQ 10-bit (MOV), H.265 10-bit (MOV), H.265 8-bit (MOV), or H.264 8-bit (MP4) -with image area set to FX (36×24). Restrictions apply to some camera features.
² With AE/AF tracking at an image quality setting of JPEG normal only. The maximum number of frames that can be captured with a single burst is fewer than that possible with high-speed continuous shooting. Use of a Nikon-recommended memory card is recommended.
³ Image area fixed at DX (24 ×16). If a DX lens is attached when C120 is selected, the high-speed frame capture setting will automatically change to C60 and image area will be fixed at DX (24 ×16). Pre-Release Capture is supported.
4 A signal from the shutter-release button resets device timecodes. Therefore, still images cannot be captured during video recording by pressing the shutter-release button when timecode synchronization is enabled.