In the wake of environmental decline and man's impact on the earth, and the ocean, there are several marine mammal hunts, including international whaling, and the dolphin slaughter in Japan, that are simply unsustainable, not to mention inhumane. Canada's annual commercial seal hunt has become the single largest commercial hunt of marine mammals on the planet. The Canadian government and fishing industry continue to support the hunt under false pretenses and in recent years the Humane Society has stepped in  to document the activities and to create awareness of the basic facts about the hunt.

The Canadian government has been trying to tone down the negative media coverage and global pressure against the hunt the last few years. This year they even tried to enforce a "no filming or documenting the hunt" policy.

This year the Humane Society recruited Nigel Barker, a major fashion photographer and most recently a judge on America's Next Top Model, to help document the beauty of these seals, whose furs would otherwise end up selling to the fashion industry itself. 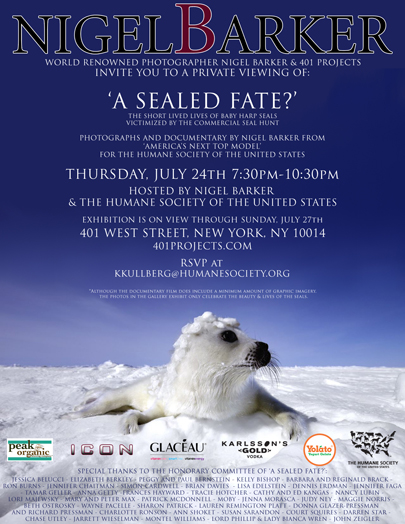 Nigel brought a crew and his equipment, including medium format cameras, strobes and power packs, to the Canadian Arctic, to shoot the hunt.  For 2008 the Canadian Fisheries department set the quota at 275,000 seals to be killed. Although he did witness some of the horrors of the hunt, his images were to be used to document the beauty of these animals, not the cruelty and greed of man.

We were invited to the gallery opening for "A Sealed Fate?" on July 24th in New York at 401 Projects gallery, a fairly new art gallery in the hip area of the "west village" (West Greenwich Village for those of you not from NYC). Apparently 401 Projects is specifically used for cause related artwork and photography exhibits. It's a very cool spot. Over 800 guests, including many celebrities, turned out for the opening. 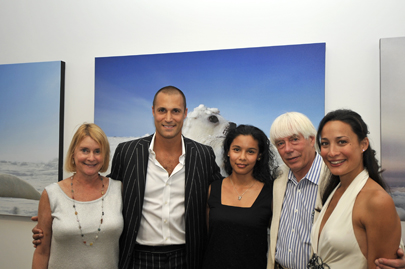 According to the Humane Society, the Canadian Department of Fisheries have made the following statement:

"The landed value of seals was $16 million in 2004. Pelt prices as high as $70 have recently been recorded. Seals are a significant source of income for some individual sealers. The money is earned over a very short period. Sealing also creates employment opportunities for buying and processing plants."

The Humane Society continues to uncover some facts of the sealing industry:

"The seal hunt provides very low economic returns for Canada, Newfoundland and individual sealers. In light of the negative impact the seal hunt has on Canada's international reputation, its continuation cannot be justified on economic grounds.

Sealing is an off-season activity conducted by a few thousand fishermen from Canada’s east coast. The Newfoundland government itself estimates there are only 4,000 active sealers in any given year. Media reports and government data confirm they make, on average, less than 5% of their incomes from sealing, and the rest from commercial fisheries.

Any profits from the seal hunt are offset by the large government subsidies that continue to be provided to the sealing industry. Moreover, vessel owners must cover the cost of repairs to their boats, which are often damaged by heavy ice at the seal hunt (insurance companies impose a high deductible for vessels participating in the hunt)."

Sealing is also practiced by the native Inuit People, and dates back throughout their history. This is a sustainable, sustenance driven practice and very different from what the world has come to know as the "Canadian Seal Hunt". The Humane Society has been documenting the seal hunt and issues relating to the hunt, the facts and the myths for several years now. 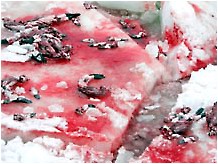 Each year, video footage of the hunt shows stockpiles of carcasses left across the ice floes and sealers dumping carcasses over the sides of their boats. DFO inspectors have acknowledged the large number of carcasses left to rot on the ice in internal documents. Moreover, despite claims to the contrary by the Government of Canada, Canadian international trade data clearly shows that Canada has not exported even one dollar’s worth of seal meat at any point in the last 5 years.

Claims that seal oil markets have grown substantially in recent years are also untrue. Seal oil is a byproduct of the skin trade (blubber is attached to the skins when they are removed from the seals). Canadian international trade data shows that Canadian exports of marine mammal oil in 2004 were valued at just about half of what they were in 2000 It is impossible to characterize this as "substantial growth."

Make no mistake, sealers kill seals for their skins—there is no trade in seal meat and trade in seal oil is brings in very little additional income."

Lastly, as it relates to the inhumane mathods used and condoned by the Canadian Fisheries Department, which claims:

"Hunting methods were studied by the Royal Commission on Sealing in Canada and they found that the clubbing of seals, when properly performed, is at least as humane as, and often more humane than, the killing methods used in commercial slaughterhouses, which are accepted by the majority of the public."

While in actuality, the Humane Society rebuts based on facts that this method is cruel and unacceptable. They have documented inhumane methods that must stop:

"The Canadian commercial seal hunt involves a level of cruelty that no thinking, compassionate person would tolerate if they could see it for themselves.

While cruelty may exist in other wildlife hunts and in domestic animal slaughters, this does not change the irrefutable fact that Canada’s commercial seal hunt results in considerable, unacceptable, and needless suffering. Veterinary studies, video evidence and eye-witness testimony by independent journalists, scientists and parliamentarians confirms that seals are often skinned alive, that conscious seal pups are routinely hooked with metal spikes and dragged across the ice, that injured seals are often thrown into stockpiles and left to suffocate in their own blood, that seals are shot and left to suffer in agony, and that wounded seals often slip beneath the surface of the water where they bleed to death slowly and are never recovered. This is a level of cruelty to animals that Canadians find unacceptableespecially given it occurs to produce frivolous fashion items."

More information on the seal hunt can be found at the links below: