Sony isn't a camera name you hear tossed about by avid underwater photographers-unless they're recommending a point and shoot camera for novice divers or contemplating a plunge into High Definition video. But that could change when Sony's new 12.2MP Alpha 700 DSLR ($1500 body) shows up on the docks.

As you may recall, Sony's first foray into the DSLR market was the amateur-level 10MP Alpha 100, a camera that was largely based on the older Konica Minolta Maxxum 5D but included a new Sony sensor and image processing hardware. The Alpha 100 was an easy modification to pull off after Sony purchased KM's camera and lens divisions, and the resulting light-weight camera had high image quality, built-in SteadyShot image stabilization, and backwards compatibility with nearly all KM lenses and flash units. As a result, a few Alpha 100's made it underwater in housings made by Ikelite, Bruder, and several other European manufacturers, and the camera was a big hit among land-lubers as well. 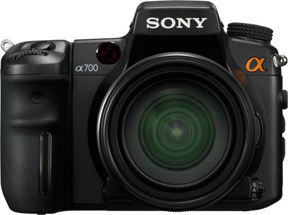 The new Alpha 700 may take some of its looks and controls from the older KM Maxxum 7D, but this is really the first DSLR that Sony can take full credit for designing. It's aimed at serious photographers and is a league above the Alpha 100 in nearly every performance category, including the way it's built, its AF system, image sensor and noise reduction, and playback features.A�A 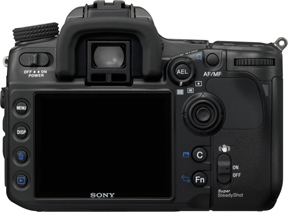 Like the recently introduced Nikon D300, the Sony Alpha 700 features a 12+MP, APS-C sized CMOS sensor (both camera sensors are made by Sony!) that gives the camera a 1.5X lens factor (so ultra-wide angle lenses are hard to come by?), and a slight resolution advantage over the 10.1MP Canon EOS 40D. Sony designed and built the Alpha 700 far tougher than the Alpha 100, with an aluminum alloy frame surrounded by magnesium alloy casings, and weather-gasketing around most seams (accept for over the memory card door which houses both memory stick and CF cards). I'd have to give the more expensive Nikon D300 the edge for overall construction, weather-proofing, and overall system versatility, but call it a draw between the two for image quality (based on initial test samples) and playback features.

The A700 has well placed controls, is well balanced, and features a great viewfinder with eye activated focusing that should work underwater. Both of the new Nikons and the Sony boast 3-inch LCD monitors with a wide 170-degree viewing angle and the highest detail (307,000-pixels, or VGA resolution of 640x480 pixels) of any DSLR on the market. FYI, those Sony and Nikon monitors are twice as sharp as the 3-inch, 230,000 dot (78,000 pixel) monitors found on the new Canon EOS 1Ds Mark III or EOS 40D.) Reviewing images on the 3-inch monitor is a real joy, but also like the Nikon D3 and D300, the Alpha 700 features an HDMI connector so you can hook the camera up to an HDTV back in the hotel lobby and show off the day's catch in stunning 1080i HD resolution (a marked improvement over VGA or LCD projector presentations.)

The Alpha 700's built in sensor-shake image stabilization is one of the only advantages (besides weight) that it has over the Nikon D300 and Canon 40D, and it works with any compatible lens (unlike the IS lenses available for Nikon and Canon that cost more than non-IS lenses). Sony claims its SteadyShot IS offers up to a 4 stop advantage when shooting in low light without a tripod, and this feature might be a boon to underwater photographers trying to get a steady existing light shot at 1/8-1/30 sec shutter speeds (although it doesn't reduce movement in the picture). And it will surely help reduce the shake in photos taken from a moving boat or Jet Ski. However, the Nikon D300 and Canon EOS 40D both have a much more valuable feature for UW photography-live preview on the 3-inch monitor-that Sony, for some inexplicable reason, failed to include in the Alpha 700. (Could it be too difficult, or expensive, to include live preview in a system that also includes sensor shake? Olympus didn't think so in when it built the E-510.)

Despite this one oversight, the A700 has several other features that will attract serious shooters, both above and below water. The Alpha 700's 11-point AF system is more sensitive and faster than the one found on the Alpha 100, and the center sensor is made up of five individual sensors, a unique design that combines two horizontal and two vertical sensors surrounding a cross-type sensor. Unlike CCD imaging sensors on several other DSLRs, the 12.2MP Exmor CMOS sensor on the A700 has A/D conversion and noise reduction built onto the sensor itself. This should, according to Sony, make for lower noise levels and higher image quality, especially at higher ISO settings (the A700's ISO ranges from 200 to 3200 in normal mode, and up to ISO 6400 in extended mode). Sony's Dynamic Range Optimizer (DRO) function, which improves the shadow and highlight detail found in high contrast images, now includes five user-selectable levels, plus the DRO settings can now be applied to RAW images during post processing. The A700 viewfinder is now brighter and more accurate, and Sony includes an IR remote control that fires the camera or can be used to run slide shows in playback mode. Dual memory card slots now support Memory Stick Duo with PRO-HG high-speed data transfer, as well as CF cards compatible with UDMA high speed (300X) transfer speed. Those higher read/write speeds enable JPEG bursts at up to 5 fps for the capacity of the card (RAW shooting limits the burst capacity).

Will the A700 attract more underwater photographers than the D300 or EOS 40D? That's anyone's guess, but there are enough features in this new model to make it a worthwhile, and profitable endeavor for housing manufacturers. (Just think about all those Sony point and shoot owners looking to move up the digital food chain without having to deep-six all their precious Memory Sticks.)