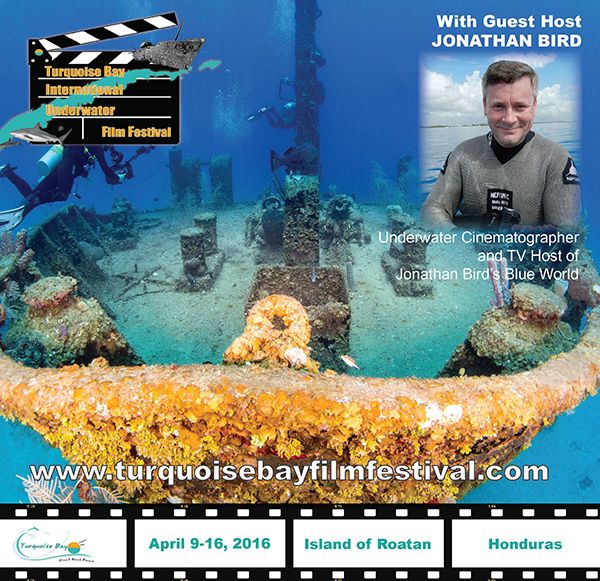 Turquoise Bay in Roatan, Hondouras has announced a new underwater film festival, which will take place in April of 2016. The first edition of this ambitious event will feature seminar presentations, an on-site videography contest, and a gala dinner.

The event is being hosted by renowned filmmaker Jonathan Bird, who will work with participants to help improve their underwater videography, leading up to the contest. The top prize will be given the Stan Waterman Legacy award.

More details can be found in the press release below or the DPG Event section.

Held April 9-16, 2016, the event will feature seminars, an on-site competition, an International Film competition and a Gala Night. The Gala event will be held on April 15, 2016 at the Beach Club San Simon, where winners will be announced.

Founders of the event, Michel Labrecque and Julie Ouimet of N2Pix and Jesus Alberto Reyes, COO and Commercial Director of Turquoise Bay Dive & Beach Resort, are excited to announce that over $10 000 in prizes will be awarded to winners and participants of the event.

The International competition is open to filmmakers from around the world. The Best in Show will receive the Stan Waterman Legacy Award and prizes will also be awarded to 2nd and 3rd place films. Organizers of the event are happy to pay tribute to Mr. Waterman, a pioneer in underwater filmmaking who will be a member of the panel of judges. The submission deadline for short films of 20 minutes or less is March 1, 2016.

The weeklong event will be hosted by Jonathan Bird, Emmy award-winning cinematographer and host of Jonathan Bird’s Blue World. During this week, participants will dive, attend seminars and compete in short film and video snapshot categories. Prizes will be awarded in each.

Both the on-site and international competitions are open to videographers of all levels. Several industry sponsors have already confirmed their support for this inaugural edition of the Film Festival. Organizers are thankful to Aquatica/Amphibico, Epic Diving, Ocean Quest Resort and PADI who have come onboard as Premiere and Agency Sponsors of the Festival.

Full details of the event and how to participate are available on the Festival’s web site.