We know that millions of sharks fins are sold each year, but what we don't know is what sharks from which regions are being most targeted by the shark finning industry.

A new groundbreaking study has traced scalloped hammerhead shark fins that were being sold in the markets of Hong Kong to their geographic origin. 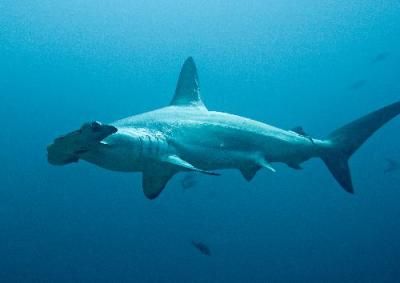 Scalloped Hammerhead Photo by Terry Goss 2008/Marine Photobank
A paper published online today in the journal Endangered Species Research pinpoints the location of the fins to shark populations that, in some cases, were from endangered shark populations thousands of miles away.

Senior author of the paper and Director of the Guy Harvey Research Institute and Save Our Seas Shark Center Dr. Mahmood Shivji said that "although we've known that a few million hammerhead shark fins are sold in global markets, we now have the DNA forensic tools to identify which specific hammerhead species the fins originate from, and in the case of scalloped hammerheads, also what parts of the world these fins are coming from." 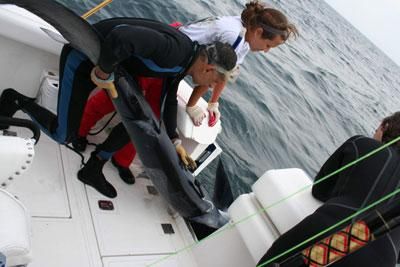 Senior author Dr. Mahmood Shivji is shown working with a shark
To determine the location of the finned sharks, researchers analyzed fingernail-sized DNA samples from 62 scalloped hammerhead shark fins which were obtained from Hong Kong markets.  Through examination of the DNA sequence the researchers managed to match 57 of the 62 fins to an origin in either the Indo-Pacific or Atlantic.

The researchers feel their findings highlight the need to better protect scalloped hammerheads from the international shark fin trading. They plan on suggesting just that by attending the Convention on International Trade in Endangered Species CITES in March, 2010 in Qatar.

The researchers hope that the new DNA techniques will help the scalloped hammerhead get listed under CITES Appendix II, which would mean that all trade of the species would require monitoring and permits throughout international boundaries.

Dr. Shivji says that "The fact that scalloped hammerhead shark DNA shows strong population DNA signatures means that we can trace the geographic origin of most of their fins sold at markets. From a broader perspective, this type of DNA forensic testing of fins will be an incredibly useful tool to prioritize areas for conservation and ensure sharks aren't wiped out in particular regions by excessive fishing."

In other words, knowing the species and geographic origin of the fins that are being traded allows for more efficient and effective management.

This makes a lot of logical sense to me. I really like the direction of this study. Management is always a number one priority in protection. You can pass all the laws you want, but if they are not enforced, what's the point?

Lead author of the paper, Dr. Demian Chapman, pointed out that the findings show "that the scalloped hammerhead fin trade is sourced from all over the globe and so must be globally tracked and managed." 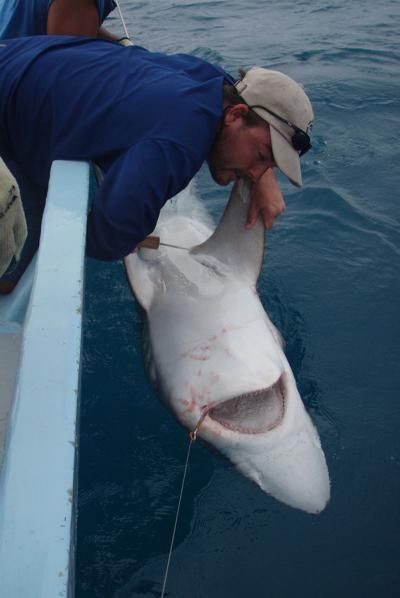 Dr. Demian Chapman getting ready to release a night shark after having taken a sample for genetic testing. Photo credit: D. Abercrombie
This is the main problem. It's great that we now know for sure through DNA analysis that shark finning is a global problem, but that certainly doesn't make it easier to manage.

Another fact that worries me which I learned from this study: 1 kg (2.2 lbs) of scalloped hammerhead fin can sell for about $US 120.00 at Hong Kong market. That's a lot of money for a lot of fishermen that make very little money.
I think we can all agree that this helps the researches get Scalloped Hammerheads get listed under CITES Appendix II. Good luck to Dr. Chapman, Dr.  Shivji and the rest of the team.