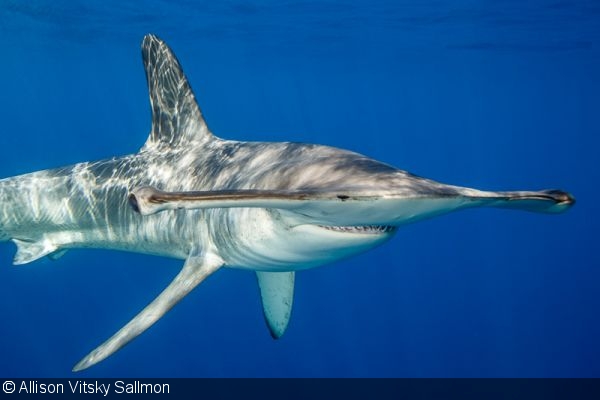 With overfishing driving many hammerhead species closer to the brink of extinction, a team of researchers has been focusing on determining the migration patterns of smooth hammerhead sharks (Sphyrna zygaena) in the western Atlantic Ocean in an effort to identify areas and times for management action to help in building back the depleted species.

The team tagged juvenile hammerheads off the US Mid-Atlantic coast using fin-mounted satellite tags and tracked the animals for up to 15 months. The tags reported the sharks’ movement patterns in near real time via a satellite link to the researchers.

“Getting long-term tracks was instrumental in identifying not only clear seasonal travel patterns, but importantly, also the times and areas where the sharks were resident in between their migrations,” said Ryan Logan, first author of the paper published in Frontiers in Marine Science. Logan is a PhD student at Nova Southeastern University’s Guy Harvey Research Institute and SOSF SRC and the Save Our Seas Foundation Shark Research Center (SOSF SRC).

Logan and his coworkers found that the sharks migrate between two seasonally resident areas: coastal waters off New York in the summer and off North Carolina in the winter. Identifying these habitats is vital for ultimately designating the areas as “Essential Fish Habitat”—with the accompanying limitations on fishing and development.

The high-resolution data also revealed that the hammerheads spent a lot of time in the Mid-Atlantic Shark Area (MASA) in the winter, starting in December. The MASA zone is closed to bottom longline fishing between January 1st and July 31st to protect dusky sharks, so beginning the closure of the zone in December would further reduce the fishing mortality of juvenile smooth hammerheads.