Perhaps no shot is more coveted in underwater photography than the over-under, but a new concept presented by designer Han In Kyung could change this.

While the challenges of this shot often seem insurmountable, such as finding a pleasing underwater subject, finding an interesting subject above water, and even keeping beads of water from forming on the dome port, it would seem that this new camera design named the “Underabove” will make shooting these traditionally difficult shots easier for the everyday photographer.

Recognized by the Red-Dot Award for Concept Design -a prestigious competition that receives over 12,000 submissions from across the globe annually- the “Underabove” is made from polypropylene in the shape of a buoy and is designed to be almost neutrally buoyant in salt water. The design features two cameras, one below the water line and one above, as well as a three inch LCD screen that will display the combined image morphed from the two cameras.

Although this concept is only in the infancy of its creation, the attention it has received from RedDot and the consumer market is certainly promising. Is it only a matter of time before underwater photographers with modified 12 inch dome ports and fisheye lenses are replaced by this crafty device? 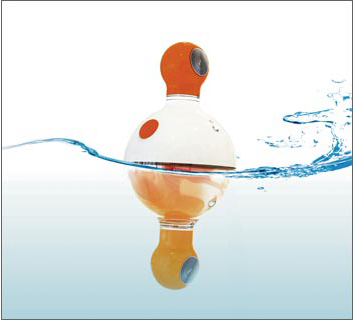 For the full announcement you can visit the RedDot homepage