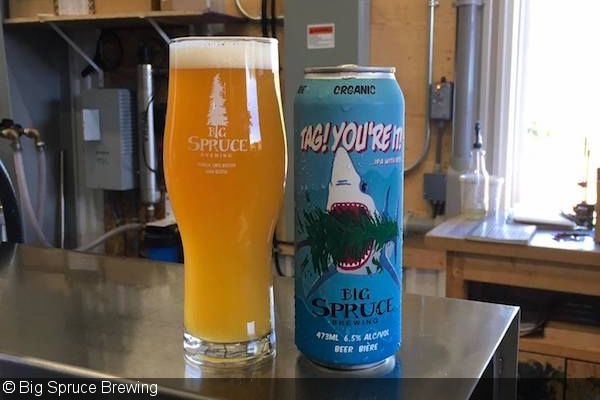 An unlikely “collabeeration” was recently formed when Cape Breton’s Big Spruce Brewing out of Nyanza, Nova Scotia teamed up with marine scientists at the Dalhousie-based Ocean Tracking Network. In an effort to raise awareness about sharks and endangered species the brewing company created a new beer called “Tag! You're It” and are calling it “The IPA with a bite.”

By collaborating with marine scientists the owner of Big Spruce Brewing, Jeremy White, hopes bring awareness to the variety of sharks at risk in Nova Scotia waters. 20,000 cans will be produced and 50 cents from each can will be donated to the Ocean Tracking Network.

OTN is currently researching blue sharks in Nova Scotia's waters and would like to understand why the young females seem to like the waters off the eastern passage. The donations from Big Spruce Brewing will help them tag the sharks to better understand how to protect them. The OTN, based out of Dalhousie University, uses electronic tags to track 140 marine animals in 29 countries worldwide.