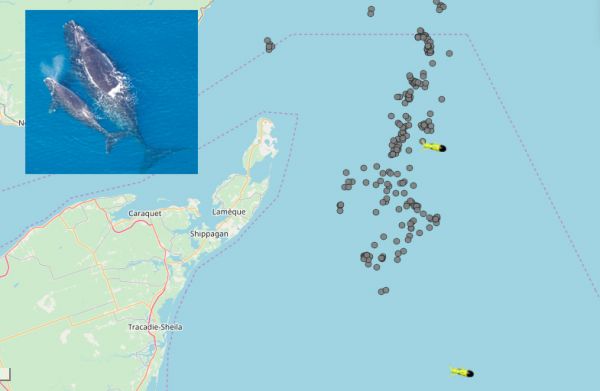 Want to save the endangered North Atlantic right whale? There’s a m-app for that.

Scientists hoping to monitor the movement of the right whales can now turn to WhaleMap, an interactive map that crowdsources whale observation data from various sources and is updated in live time. PhD student Hansen Johnson of Dalhousie University came up with the idea after using underwater gliders to track whales acoustically.

"I just started making maps and sharing them with our research group and then it just slowly grew from there," Johnson told the CBC.

The urgency is higher than ever: Last year, nearly 20 endangered North Atlantic right whales died off North America’s northeast coast. It is estimated that only 450 right whales remain.

Users can zoom in on the map and click observation points for more information. The sightings tend to be grouped close together because the whales feed and travel in large pods—that’s also the reason the species is so vulnerable to boat traffic and other threats.

"The urgency of the situation has gotten substantially higher, so now we just needed a new tool to organize all the information coming in," Johnson said.

Check out the full story, here.