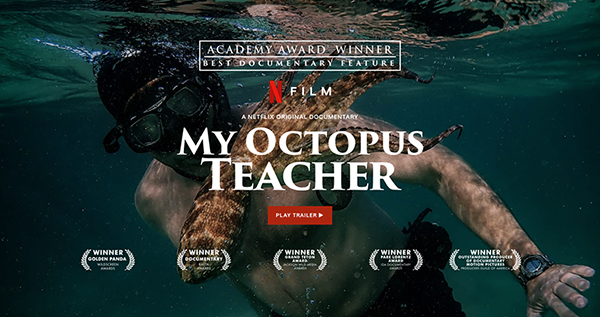 While this year’s socially distanced Oscars was universally panned for its lack of entertainment value, there was general agreement that the right movies got the awards. And we won’t argue with the winner of the Best Documentary Feature, a fascinating film with the intriguing title, My Octopus Teacher.

The documentary follows freediver and videographer Craig Foster as he forges an unlikely friendship with an octopus living in a kelp forest in South Africa. Foster decides to escape career burnout by visiting the amiable cephalopod on a daily basis—for nearly a year!—discovering how she defends herself against predators (pyjama sharks), her mysterious camouflage methods, and the intriguing ways she changes her swimming style depending on her surroundings.

One day, after weeks developing their tender bond, Foster loses track of the animal and spends days looking for her. When he finally locates the octopus, it’s an emotional nuzzling session that will have you reaching for the tissues. We won’t give anything else away—you can watch it on Netflix—but suffice it to say, this is a touching film that will resonate with every diver and underwater photographer.

The first South African nature documentary to become a Netflix Original, the film was 10 years in the making. Underwater cameraman Roger Horrocks was director of cinematography and the film includes footage shot by both Foster and Horrocks. Foster is co-founder of Sea Change Project, a community of media and science professionals dedicated to telling ocean stories with the goal of protecting South Africa’s marine environment, in particular the kelp forests of the Great African Seaforest.