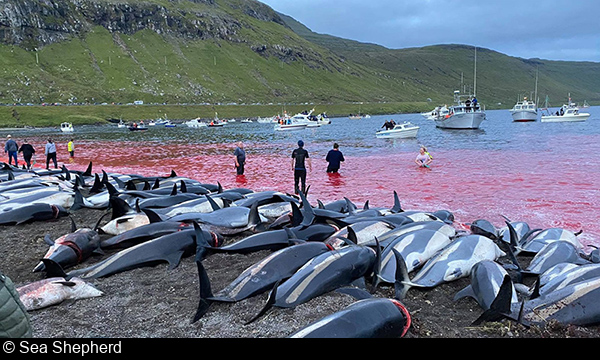 Worldwide condemnation has emerged following the gruesome slaughter of an unprecedented number of dolphins during the infamous Faroese hunt known as “the Grind.” According to Sea Shepherd, the 1,428 animals that were killed on Sunday, September 12th, is the largest number of dolphins or pilot whales ever taken in a single hunt in the Faroe Islands, a Danish archipelago about 200 miles north of Scotland in the North Atlantic.

The super-pod of Atlantic white-sided dolphins were driven into shallow water at Skálabotnur Beach—for around 30 miles over many hours—by men in speedboats and on jet skis, before being brutally killed. Ordinarily, the butchered dolphin meat is shared among the hunters and anything left over among the locals in the district where the hunt takes place. However, some Faroese locals told Danish newspaper Ekstra Bladet that they are concerned there will be too much meat for the archipelago’s 53,000 residents to manage. One said: “My guess is that most of the dolphins will be thrown in the trash or in a hole in the ground.”

The sheer scale of the slaughter has drawn outrage from conservationists like Sea Shepherd—who have been fighting to stop the Grindadràp since the early 1980s—but also Faroese locals and even pro-hunting groups. The Faroese press, not known for publishing anything controversial regarding the hunt, quoted the former chairman of the Grind, Hans Jacob Hermansen, as saying the killing was “unnecessary.”

Incensed locals told Sea Shepherd that for various reasons the hunt also broke Faroese laws regulating the Grind: A different district’s Grind foreman called the hunt without the proper authority; many participants had no proper license; and many dolphins were photographed with lacerations caused by speedboat propellers, unacceptable under the Grind’s rules. According to Sea Shepherd, the Faroese police has been informed about these violations.

Sea Shepherd has released a graphic video showing the end of the hunt, which the organization has labeled a “massacre.”