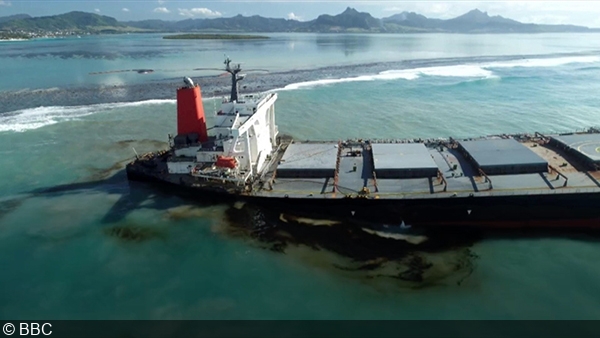 Latest: Around 4:30pm local time on Saturday (August 15th), the Japanese bulk carrier that hit a reef off the coast of Mauritius, polluting the delicate marine ecosystem with around 1,000 tonnes of fuel oil, finally broke apart. The remaining 3,000 tons of oil had been pumped out of the stricken vessel with only an estimated 90 tons on-board at the time of the breakup.

MV Wakashio, a Japanese cargo ship carrying 4,000 tons of fuel oil that ran aground on a coral reef off Mauritius more than two weeks ago, is threatening to “break in two,” according to Prime Minister Pravind Jugnauth. Around 1,000 tons of oil has already washed up on the east coast of the Indian Ocean island, contaminating once-pristine lagoons and shoreline. About 500 tonnes was pumped out on Monday, leaving around 2,500 tons on board.

A French military aircraft with pollution control equipment has been sent from nearby Réunion Island, and a six-member expert team has been sent from Japan. Ignoring a government order to leave the clean-up to local authorities, volunteers have been filling sacks with straw from fields to create makeshift barriers. “People have realised that they need to take things into their hands,” environmental activist Ashok Subron told AFP on Sunday. “We are here to protect our fauna and flora.”

The ship ran aground at Pointe d’Esny, which is home to rare wildlife as well as precious wetlands. The spill is threatening countless animal species both above and below the waterline, promising catastrophic impacts on health, food security and the economy.

Mauritius is next to one of the world’s most concentrated shipping lanes, which connects Asia, Africa, Europe and Latin America. During the month of July, more than 2,000 vessels passed close by the Mauritian coast. Satellite data now reveals that the MV Wakashio was much further north than it should have been, and it had been on a collision course with the island nation for days.