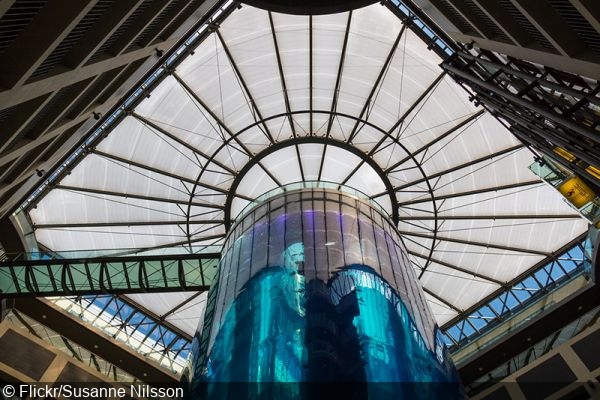 A massive aquarium built into a Berlin hotel exploded, injuring several people and causing “tsunami”-like destruction to the nearby area.

The 82-foot-tall display—considered the world’s largest freestanding cylindrical tank—exploded early morning local time. Called the “Aquadom,” the aquarium housed more than 1,500 fish and other inhabitants in roughly 250,000 gallons of water. Massive waves washed through the Radisson Hotel lobby and onto the street.

The cause of the explosion is unknown at this time, but low temperatures may have contributed. While the destruction of the multi-million-dollar tank is unfortunate, officials are grateful human injury remained limited.

“We were lucky that it happened at a time that only two people were slightly injured,” Berlin Senate member Markus Kamrad told The New York Times.

It’s not all bad news. Officials were surprised to find fish surviving in the bottom of the tank and in the basement. Local veterinary clinics and aquariums are assisting to house the rescued species—some of which are “protected” and “rare.”

Updates to the story can be found here.