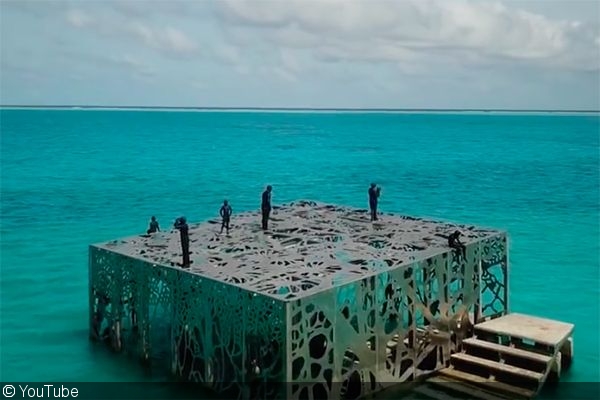 Underwater marine life is probably the coolest thing to photograph in the ocean. Jason deCaires Taylor’s underwater sculptures might just be a close second. But the world is bereft of one of Jason’s installments after the Maldivian government demolished it last week.

The sculpture—titled “Coralarium”—appeared in the shallows off the Fairmont Maldives resort and was meant to raise awareness for ocean conservation and also provide a habitat to marine life. However, Maldivian authorities and religious leaders had criticized the sculpture for depicting human figures—an idea that is discouraged under Islamic law.

On September 21, authorities dismantled the structure using saws, pickaxes and ropes. It took only a matter of hours to destroy what deCaires Taylor had built over the course of nine months.

“On Friday last week I was extremely shocked and heartbroken to learn that my sculptures have been destroyed,” said deCaires Taylor. “The Maldives is still beautiful, with a warm and friendly population, but it was a sad day for art and a sad day for the environment.”

For its part, the Fairmont Maldives Sirru Fen Fushi issued the following statement: “While we are very surprised by the removal of eco-art pieces by the authorities, we respect the people, traditions and customs of the Maldives. The removal process was peaceful and friendly without interruption to our world famous service.” The resort also pointed out that “[the] Coralarium structure and underwater trees remain intact, ensuring the coral restoration program remains alive and well. We have initiated immediate re-imagination plans with the artist, creating a new underwater gallery that will be in harmony with the locals and environment.”

Editor’s Note: This story has been updated with the addition of the statement from the Fairmont Maldives resort.