DPG congratulates Jonathan Bird, DPG contributor and Pro Gallery Member, and the whole production team of Jonathan Bird's Blue World on their Emmy win. If you haven't seen it, the show is educational, fun, and beautifully shot. Below is a press release and you can read more the show's blog.

Jonathan Bird’s Blue World received a 2010 New England Emmy Award for the segment Aquarist for a Day, where series host Jonathan Bird spends the day at the New England Aquarium, where he does some cleaning, some food prep, and then dives in the Giant Ocean Tank to feed the sharks. It’s a dirty job, but totally entertaining. The award was handed out Saturday, May 22, 2010, at the gala 33rd Annual New England Emmy Award ceremony at Gillette Stadium in Foxboro, Massachusetts. 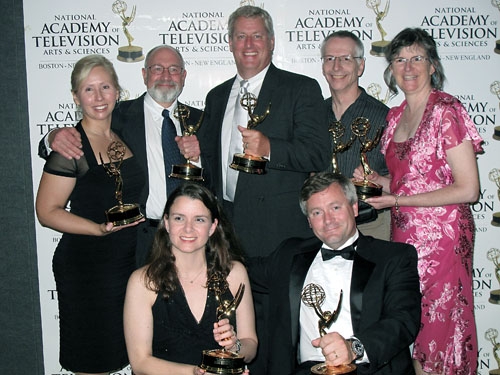 Jonathan Bird’s Blue World is an underwater adventure series for both children and families. Each episode brings viewers to the edge of their seats as they wait to find out if the mother turtle, dragging herself across the beach in the middle of the night, is able to successfully lay her eggs, or what lurks behind the next stalagmite in an underwater cave. Audiences meet Wilma the Whale, a young beluga that lives by herself in an isolated Bay in Nova Scotia for several years, befriending the local populace who come out to play with her, and then one day disappears. Stories like these engage audiences and teach them about the underwater world.

Jonathan Bird’s Blue World has been running on more than 260 public television stations in the United States since May 2008. Produced by Jonathan Bird Productions, an independent production company, the series has been shown over 5,600 times in 32 states to over 160 million potential viewers. Top markets such as Los Angeles, San Francisco, Boston, Washington DC and Atlanta have programmed the show continuously for months.

"We were thrilled to win the Outstanding Segment category," says Jonathan, "since this is not a children's category, and goes to show that Jonathan Bird's Blue World is enjoyed by audiences of all ages, not just kids!"

Jonathan Bird’s Blue World won in the category of Outstanding Magazine/Feature Segment. The following people were named in the Award: