Former Basketball Player Buys Right To Name New Species Of Shrimp
By Matt J. Weiss, December 8, 2009 @ 09:49 AM (EST)
Source: Wired.com
If you followed basketball at all in the 1990's the name Luc Longley will sound familiar - he won three NBA championships with Michael Jordan and the Chicago Bulls.

If you follow new shrimp species of the world, Luc Longley will now also be a familiar name.  Longley recently won an auction to name a shrimp species that was discovered off the southwest coast of Australia.

Graduate student Anna McCallum discovered the species  while working as an assistant researcher, and rather than naming it herself, auctioned off the right to name the shrimp on eBay and donate the proceeds to the Australian Marine Conservation Society.

Longley's winning bid was for $2,900 hundred dollars, and he name the shrimp Lebbeus clarehanna after his daughter, Clare Hanna Longley. 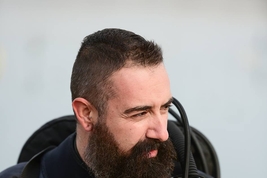