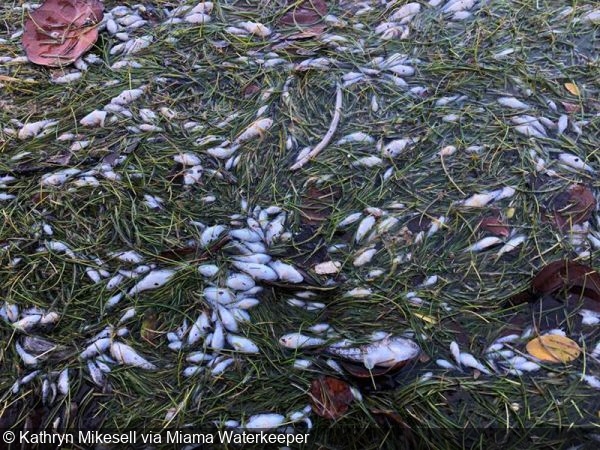 Over the past week, thousands of dead fish, crabs, eels, and other marine life have been washing up on the shores of South Florida's Biscayne Bay. Local non-profit organization Miami Waterkeeper first reported the die-off on Monday, August 10th, noting very high water temperature (~90°F), and low dissolved oxygen levels. On Wednesday, an aggregation of rays was reported nearshore, and experts believe that the rays were struggling to breathe due to low oxygen levels in the water.

“Literally overnight, the bay became a dead zone,” writes the Miami Waterkeeper. “This event is not a ‘normal occurrence,’ but rather a sign that something is seriously out of balance in our Bay. It can be recognized as a ‘symptom’ of high levels of pollution in our water.” Nutrients such as phosphorus and nitrogen from sewage, fertilizers, weed killers, and pet waste create algal blooms that lead to low oxygen conditions. Blooms have also been blamed for seagrass die-offs in recent years.

Miami Mayor Francis Suarez tweeted a four-point plan to avoid further fish kill in the bay, including deploying emergency pumps to aerate the water and make compost receptacles available so that dead fish can be cleared. Miami-Dade Fire Rescue boats were spotted over the weekend using hoses and pumps to try and oxygenate the water.

Dr. Rachel Silverstein, Miami Waterkeeper’s Executive Director, says long-term solutions are needed, such as fixing sewage leaks and avoiding the use of fertilizers: “We are reaching conditions where the bay is no longer supporting life.”