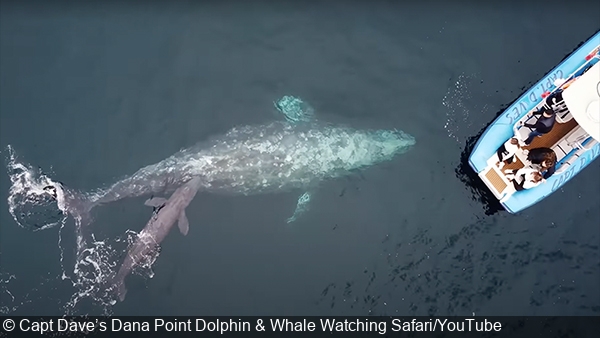 Whale watchers were treated to a once-in-a-lifetime sighting off the coast of Dana Strands Beach in Dana Point, California, when a gray whale gave birth alongside their boat. Amazing aerial footage of the newborn calf’s first moments captured by a drone were posted to Captain Dave’s Dana Point Dolphin and Whale Watching Safari’s YouTube page. Gray whales are regularly caught on camera in Southern California, but recorded births are extremely rare.

“At first, the sighting appeared to be a typical migrating gray whale,” the YouTube page writes. “As the boat slowly approached the animal, our crew noticed it was behaving sporadically. Passengers and crew saw something orange and red colored in the water that they thought might have been kelp. Instead, a newborn calf came up to the surface! For a minute, many of us thought it may be a shark or predatory event. But no, instead of the end of life, it was the beginning of a new one!”

The page points out that gray whales tend to give birth off Mexico’s Baja California, as their protected lagoons offer safety from predators such as orcas, as well as warm water for calves who have yet to build up a thick layer of blubber. Every year, gray whales migrate along the US west coast, a round trip of more than 10,000 miles—one of the longest migrations of any mammal.

Check out the video below.