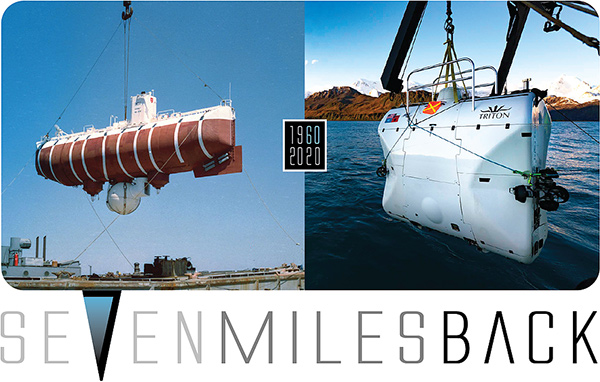 On January 23rd, 1960, Don Walsh, a US Navy officer, accompanied Swiss Jacques Piccard on the first crewed dive to the Earth’s deepest point in the bathyscaphe Trieste. Now, 60 years after the historic journey, Walsh’s son Kelly has become the 12th person to visit the floor of the Mariana Trench, almost seven miles down in the Pacific. In case you’re counting, 12 is the same number of people that have walked on the surface of the Moon.

Walsh’s dive, on June 20th, which he described as “a hugely emotional journey” took 12 hours and saw him reach a depth of around 35,843 feet. Vescovo and Walsh descended to one of the three distinct zones in the Challenger Deep called the “western pool.” That’s the same spot Don Walsh and Jacques Piccard visited, and it was the first time anyone had been back there since that groundbreaking dive.

Kelly Walsh and I diving to the bottom of the Western Pool of Challenger Deep yesterday. He is the son of Don Walsh, the captain of the Trieste, the first sub to the bottom of the Deep. We spent 3.1 hours on the bottom, traveled over two miles, and successfully made it to the surface after a total 12- hour dive. A great father - son exploration story I was very happy to help make happen for this Father's day. (Happy Father's day to my own Papa, may he rest in peace.)