I stopped by the Nexus booth to visit Lee Peterson and Tom from Marine Camera Distributors and Joe Holly from Marine Visions. Since I shoot Nexus housings myself, I was particularly interested in hearing about the Nikon D300 and D3 housings. But I was equally as excited to learn that Nexus had a prototype for the new Olympus E-3 SLR. This is apparently the metal housing that they were eluding to when we talked to them at the PDN Photo plus Expo in New York. 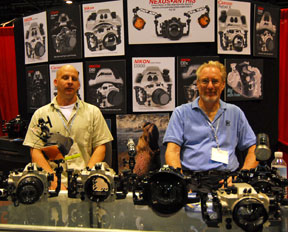 Attention to those looking to Nexus for a D300 housing – expect delays. Apparently there is an issue with

Not that style matters, but the new line of Nexus housings are pretty much identical in styling of existing models, which have been consistently compact and well built.