Although we specifically wanted to discuss the specifics of the DEEP RED housing that is currently in development, this was another booth that we weren’t able to get to spend enough time in due to our crazy show schedules.

Gates had on display their solid-built mechanical housings for the high end Canon XH-A1/G1 cameras, as 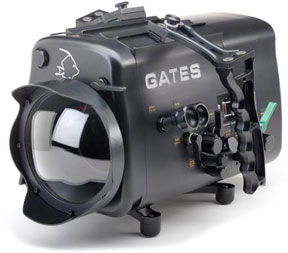 well as housings for the more popular prosumer Sony HC-7. The Sony HC-3 was a very popular cameras and housing combo, and the successor HC-7 may be even more so.

Personally, I’m curious about the DEEP RED housing, as I am contemplating purchasing a RED camera next year as more become available. The RED ONE camera can record resolutions up to 4520 x 2540 using a Super 35-sized CMOS sensor. With an initial price tag of $17,500, producing high-resolution digital cinematography is attainable without totally breaking the bank. To put it in perspective – renting a Sony HDW-F900 HDCAM for one week, will set you back about $7,000. As a photographer looking to make the move to video and cinematography, I am now realizing how significant a budget shock comes with this process! I am however looking forward to getting into video in 2008.

Here’s a recap of the DEEP RED Press Release:

For further information on this and other Gates products, contact Gates directly or visit our website www.GatesHousings.com.

About Howard Hall: Howard Hall is a natural history film maker specializing in marine wildlife films. Working with his wife Michele, they have produced numerous films for television including three episodes of the PBS series Nature and a National Geographic Special. Howard has also directed several IMAX films including Into the Deep, Island of the Sharks, and Deep Sea 3D. Howard is currently directing a new IMAX 3D film due for release in spring 2009.