Our buddies Blake, Norma, Jean and Mauricio were exhibiting a handful of new products, including a set of new Underwater Buoyancy Compensating Floats, a remote control shutter release (making them second only to Seacam to have such a system). Aquatica recently released a housing for the Nikon D40x, which has become a popular camera among shooters making a switch from compact to DSLR. The D40x is both compact and affordable.

Aquatica also joined the ranks of those with prototypes for the Canon 40D. Again, from the looks of how 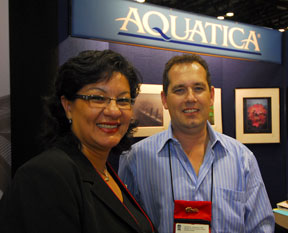 many Canon 40D prototypes were on the show floor, we expect this to be a popular and well supported camera for underwater shooters. The folks at Aquatica agree and should have the 40D housing available by the end of the year.

AQUATICA is proud to introduce its new TLC underwater Buoyancy Compensating Floats. This new product is part of a new line of AQUATICA underwater camera housings accessories that are designed to raise the comfort and performance level of the underwater photographer, Theses floats are compact, economical and simple to attach to a TLC standard strobe arm or to most housing brand on the market.

Today’s cameras, housing and underwater strobes are often smaller, denser and heavier. Theses combinations can make a long dive, especially one in macro configuration, tiresome for the underwater photographer. Using theses float will easily shed pounds of your rig, making handling and concentration much easier for the user.

Made of non corrosive light weight material they are supplied with a 1” TLC ball for mounting to either a housing or strobe arm allowing the photographer to perfectly trim the balance of his or her housing.

The AQUATICA “BCF” simple and robust design means reliability in the field. The fact that Aquatica made sure no permanent modifications are required for using them also mean quick installation.

Some of the features of the AQUATICA Buoyancy Compensating Float “BCF” include: 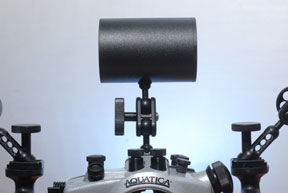 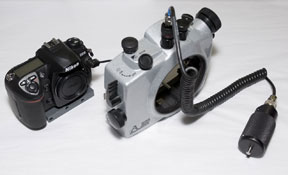 AQUATICA is proud to introduce its new underwater camera release. This exciting product is part of a new line of AQUATICA underwater camera housings accessories that are designed to push the boundary of current underwater photography, This remote is compact, economical and most important does not require any modification of the Aquatica housing. It can be used with most Nikon and Canon camera having an electronic cable release socket.

The Trigger assembly is made of anodized aluminum and is connected to the housing via a standard strobe cable that can be lengthened by adding an extension cord.

Aquatica housings are supplied with either double strobe connectors or the possibility to add a second one, this secondary connector is then used for triggering the camera, leaving the users the option to uses strobe(s) on the main connector if they so require.

Possible application includes: Pole camera operation for shark or whale photography, long exposure on tripod mounted housing for deep wreck photography as well as a host of other scientific or professional photography.

The remote control’s simple and robust design means reliability in the field. The uses of an easily exchangeable cord that is a popular off the shelf item will makes its replacement economical, quick and easy if needed. The fact that Aquatica made sure no permanent modifications are required also mean a fast conversion to the standard Aquatica housing configuration.

Some of the features of the AQUATICA Remote control include:

Aquatica Remote basic control (no cable) for Aquatica housing*: MSRP $369 USD
* In the future the Aquatica remote will also be available for other housing brands