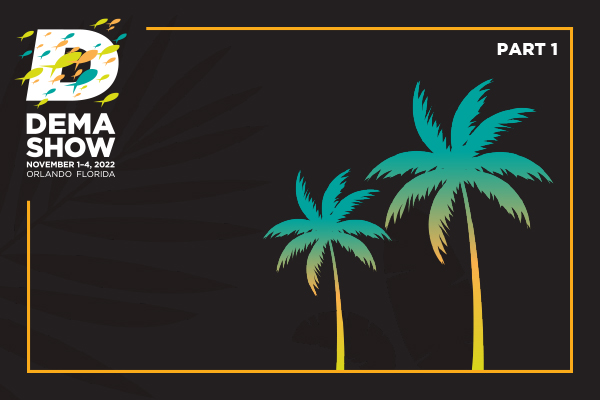 After a fun week in Orlando catching up on the latest industry news at the 2022 DEMA Show, I finally made it back to my office in the Caribbean to report on this year’s awesome event. For those who don’t know, DEMA is the biggest dive trade convention on the planet, and DPG have been attending and providing media coverage of the show for more than 15 years. We love getting the chance to catch up with friends and fellow photographers in person, and meeting our advertisers and partners who are there promoting the world’s best dive destinations and showcasing the newest camera housings and other underwater photography equipment.

After an unsurprisingly quiet show in Las Vegas in 2021, I was happy to see the Orange County Convention Center busy every day, and most exhibitors I spoke to during the four-day event were happy with the show’s outcome and attendance. This year, the DPG booth was perfectly located in the middle of the Image Resource Center, which was the busiest, and for us, the most important area of the show. All of the leading manufacturers of underwater housings, lenses and lights were in attendance, including Backscatter, SeaLife, Seacam, Nauticam, Kraken Sports, Keldan, Big Blue, and newcomers Marelux. We took the chance to meet with all of them to get our hands on their new gear and as you can imagine, there is a lot to talk about.

A full breakdown of every company’s latest products will follow this general show and travel feature tomorrow. For now, it's safe to say that I was excited by many of the new products I got my hands on last week and can’t wait to put some of them to use underwater very soon. When not attending meetings at the booth or discussing camera gear, we spent the rest of our time at the show walking the floor and talking to dive center owners and liveaboard operators about what to expect in the future. It’s no good having the latest underwater camera if you don’t have anywhere exciting to dive, so let’s take a closer look at some of the most popular dive destinations and resorts in more detail. 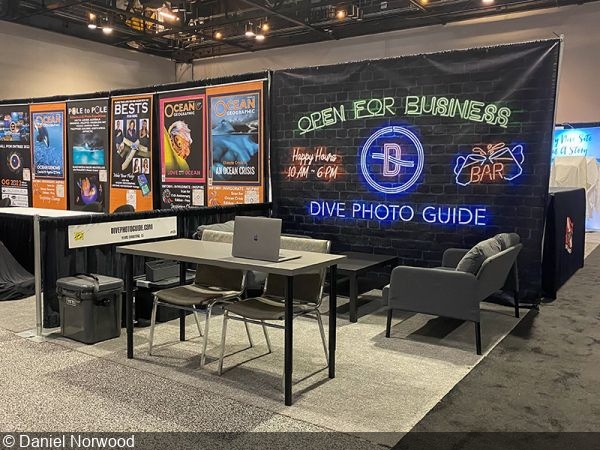 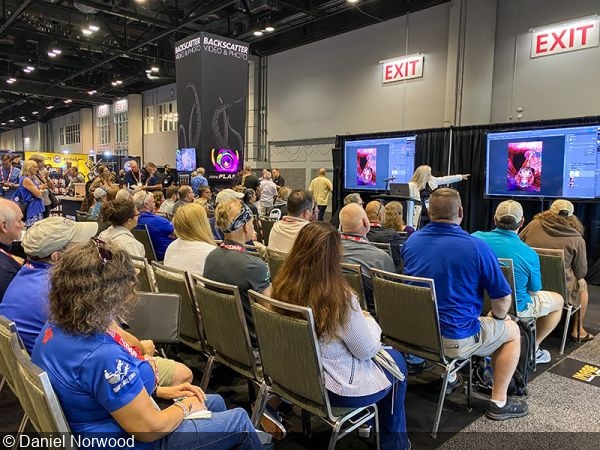 Some of our longest-running relationships are with world-famous dive centers in Indonesia, and it was great catching up with some old friends who made the long journey over to Florida to represent their resort and promote the region. I was happy to hear from Danny Charlton and his team at Lembeh Resort that things are almost back to normal and the diving has been fantastic, with all of the most iconic critters out in full force on the black sand of the strait.

The Backscatter Photo Center remains up to date with the latest equipment, and you can expect to see many underwater photographers experimenting with the new Backscatter Mini Flash 2 strobe at the resort soon. They were also promoting their latest “Capturing Critters in Lembeh” workshop in January 2024, as well as multicenter tours that cover the best of Sulawesi in Lembeh, Bunaken and Banka.

Talented shooter and friend of DPG Simon Buxton and his wife Zee were my close neighbors at the NAD-Lembeh Resort booth, and Simon was once again showcasing his amazing blackwater images and videos captured in the Lembeh Strait. Those keen to learn more will be happy to know that his popular Blackwater Lembeh book is scheduled for a second print run, so if diving in the dark with alien-like critters is your thing, contact the NAD-Lembeh team for more info and group specials. 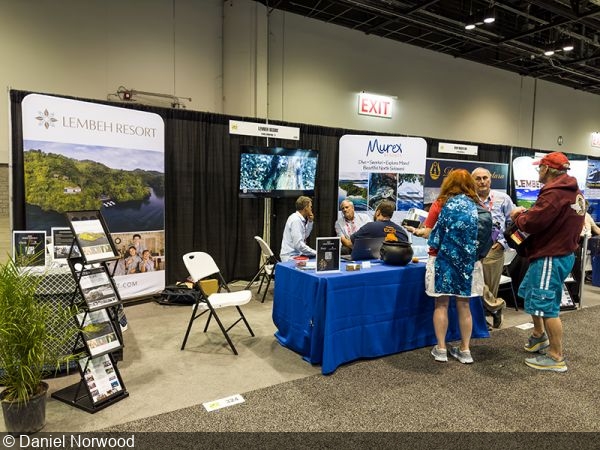 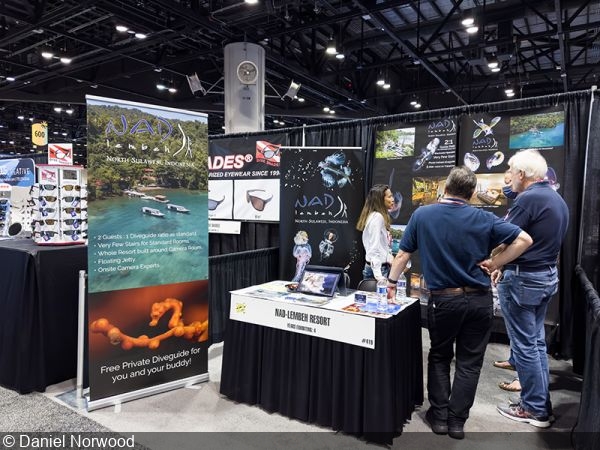 Another long-standing partner and DPG/Wetpixel Masters Underwater Imaging Competition sponsor Siladen Resort and Spa were also in attendance, and Ana and Miguel were at the booth to discuss their latest special offers and itineraries. Some of our favorite travel features were produced at their resort in Bunaken National Park, and we can’t wait to visit them again next year to create more content. They continue to offer combo trips in partnership with the aforementioned Lembeh Resort, and have also recently partnered with Coral Eye Resort in Bangka Island to add another location to their future itineraries. The resort will close from December until March next year for upgrades, but expect that to become a popular and regular add-on to stays at Siladen Resort.

Moving on from Sulawesi, I also had a long chat with former DPG editors and Indonesia dive experts Hergen Spalink and Kerri Bingham about their company Subculture Travel. Subculture is the North American representative for three of Indonesia’s best operators, liveaboards Samambaia and Pindito, and Alam Batu Resort in Bali. This trifecta of companies basically has the entire archipelago covered, from shore diving in Tulamben to action-packed trips to Komodo, Raja Ampat, and the Banda Sea. Hergen had an impressive projector screen set up showcasing some epic videos that made me dream of exploring Indonesia again. Anyone wanting to see the best the region has to offer alongside a couple of the world’s most talented and active underwater photographers should contact Kerri and Herg to learn more about their upcoming trips. 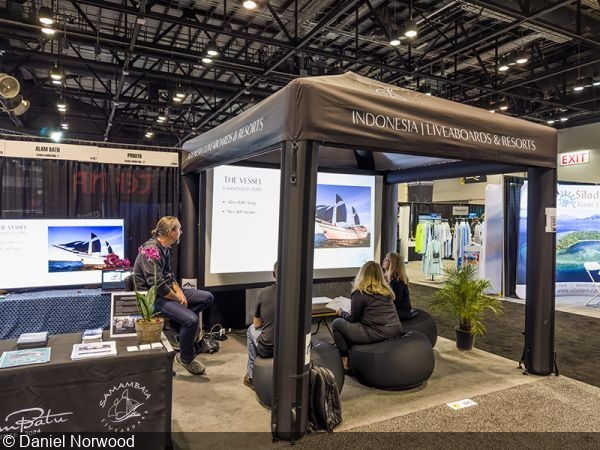 Hergen of Subculture Travel talking about diving in Indonesia 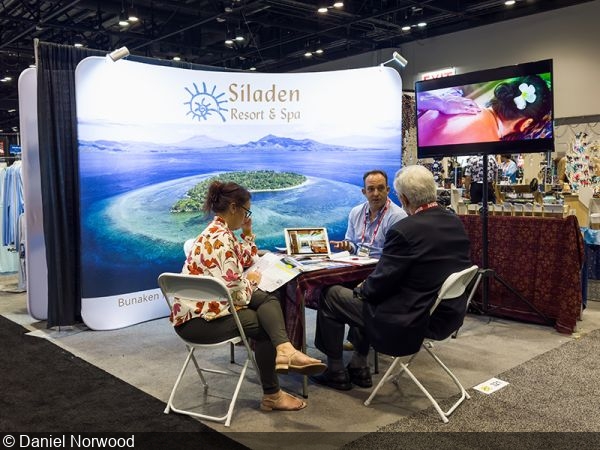 Miguel and Ana talking shop at the Siladen booth

Like last year, the majority of the Philippines’ most well-known dive operators joined forces at the Department of Tourism Philippines booth to promote the destination and their own resorts in equal measure. Some of our favorites include the awesome Atmosphere Resort in Dumaguete, Amun Ini Resort in Bohol, and Crystal Blue Resort in Anilao, which is owned and managed by regular DPG contributor and blackwater master Mike Bartick.

Atlantis Dive Resort, another longtime DPG/Wetpixel Masters Competition sponsor, was one of the only operators to have its own booth and was busy the entire show promoting specials at their two locations in Puerto Galera and Dumaguete as well as their Atlantis Azores liveaboard. Aiyanar Beach and Dive Resort was another of my close neighbors, sitting in the booth opposite, and they too had some enticing specials and packages on offer. All operators I spoke to in the Philippines were happy to finally be accepting visitors again after some of the longest and strictest COVID lockdowns anywhere. The message was clear: The Philippines is still one of the world’s best and diverse dive destinations and has so much to offer traveling underwater photographers. 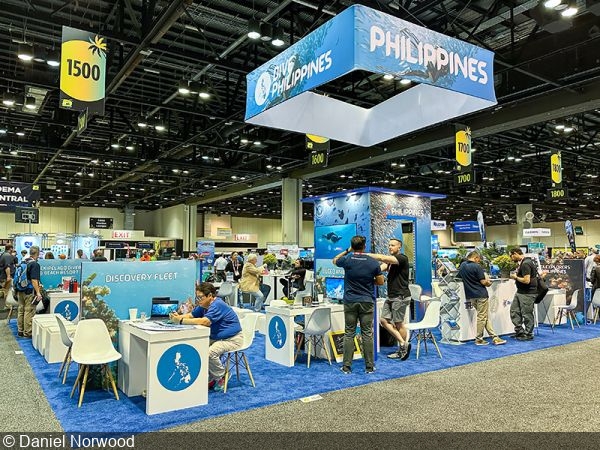 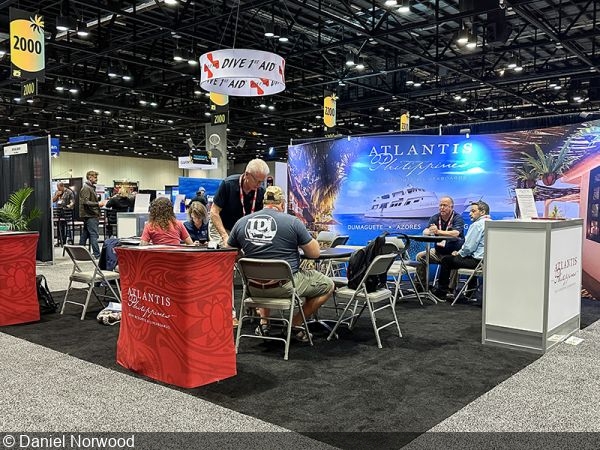 Both the Pacific and Caribbean coasts of Mexico have always been popular with scuba divers, but thanks to a more relaxed attitude to COVID regulations last year and the ongoing discovery of epic marine life encounters on the west coast, Baja California is now one of the most popular underwater photography destinations on the planet. I spent some time talking to Mike Lever, the owner of Nautilus Liveaboards, which is the region’s most prominent and respected operator. They are most famous for their fleet of liveaboard boats that visit the remote Revillagigedo and Guadalupe islands, but also operate a sister company called Baja Expeditions that offers ecotourism adventures and marine safaris focused on pelagic sharks, mobula rays and striped marlin encounters. They are also partners of our friends at Backscatter and offer photography workshops on-board every trip.

DPG contributor and well-known photographer Jay Clue also had his own booth at the show, promoting his Cabo-based company Dive Ninjas. Jay recently put together a comprehensive review of the impressive Sony Alpha 1 camera, and so we had the chance to talk camera gear and also discuss his future expedition plans and recent work with PADI. 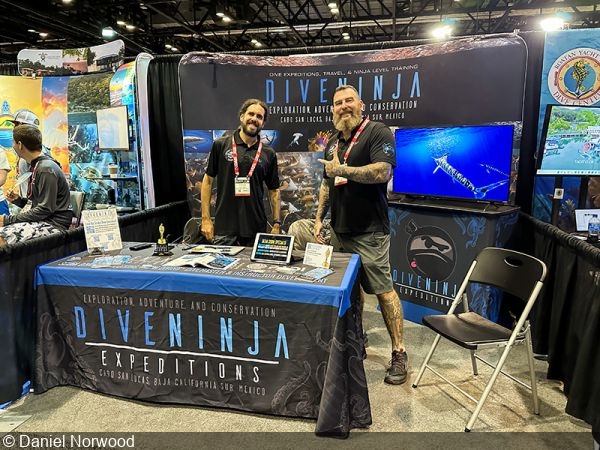 Rest of the World

Besides these three famous underwater photography destinations, other prominent locations all over the world were also well represented throughout the show. Our friends at Volivoli Beach Resort in Fiji gave us the lowdown on their brand new camera room and 18-passenger dive boat they are currently building, as well as a new conference room that is perfect for underwater photography workshops and other events. The Bahamas had its own aisle, and it was fun catching up with Neal Watson at Bimini Scuba Center and planning future dive trips with great hammerheads and tiger sharks. Bonaire, the Cayman Islands and the rest of the Caribbean also took a large section of the show floor, and numerous companies from each location were present and promoting their products.

Perhaps the most interesting conversation I had outside of talking camera gear was with the founders of Fuvahmulah Dive in the Maldives. Anyone who is up to date with the latest shark tourism activities will know about their tiger shark dive that rivals numbers and encounters at the famous Tiger Beach. It was super interesting for me to learn how the dive was set up and how it has become, in its short history, one of the craziest shark diving destinations. I plan to visit sometime next year, so keep an eye out for stories about that on DPG in the near future.

Of course, there are a few companies that cover all of the above destinations with a fleet of liveaboard dive boats, and it was nice to catch up with our friends at Master Liveaboards to discuss their latest news and most popular trips. There have been some minor changes, including swapping the boat they had in Truk Lagoon with the one based in the Solomon Islands, but otherwise everything is going well and all itineraries are operating and open for bookings. The popular Bahamas Master has new cabins, which we hope to check out soon, and the ever-popular Siren Fleet is back to what it does best in Indonesia, Palau and the Philippines. Sister company Blue O Two also deserves a mention, as they operate in a couple of destinations that Master does not, namely Egypt and the Maldives. Between the two companies, they have the majority of the world’s best dive destinations covered and have some killer deals on upcoming trips in all locations. 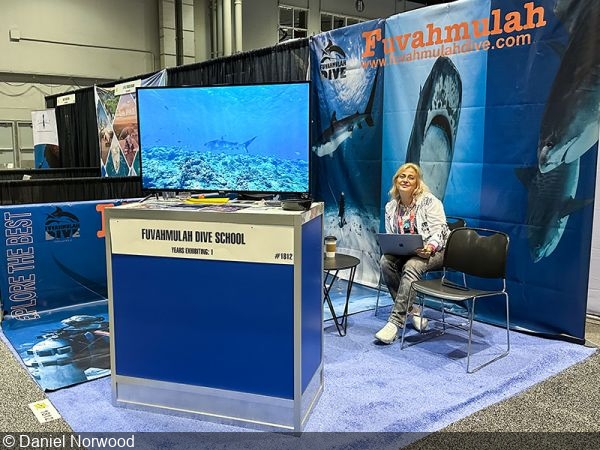 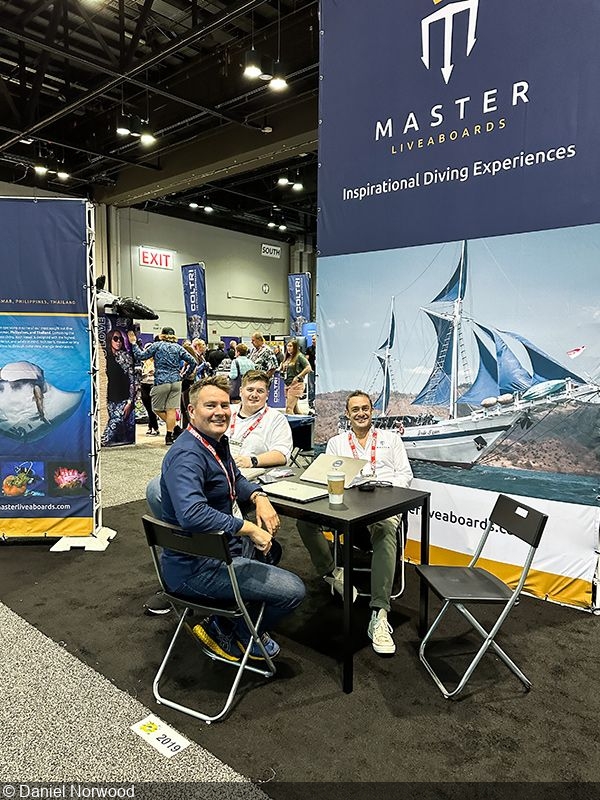 Besides reporting on travel and camera equipment, we also found time to host our annual DPG Dinner with some of our partners and friends in the dive industry, and watch some interesting talks at the Image Resource Center and the Backscatter booth. Of course, PADI, DAN, and an entire host of dive equipment manufacturers were also present, and it felt like things were almost back to pre-COVID levels in every aspect.

I felt relieved to see people enthusiastic about traveling again after more than two years of restrictions, and it was encouraging to hear that operators were making plenty of bookings for next year and beyond. We look forward to getting some of our regular contributors back out in the field as soon as possible, so keep an eye out for new Destination Portfolios, Trip Reports, and Underwater Photographer’s Guides here on DPG soon. Most importantly of all, don’t forget to check back in tomorrow for a deep dive into all of the most sought-after camera gear of the year! 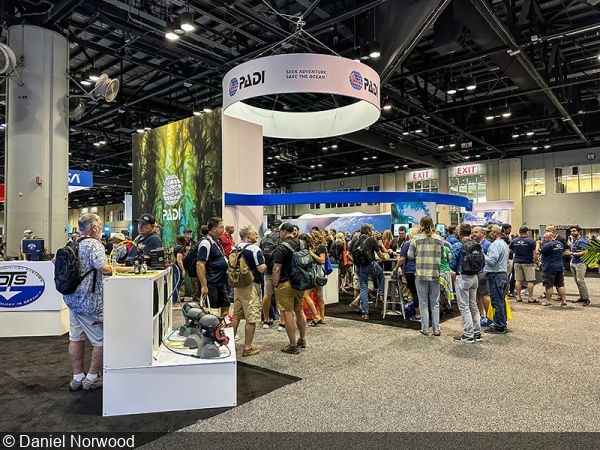 Check out the second part of our DEMA coverage, where we discuss the Backscatter, Seacam, and SeaLife booths, and feature a special presentation video by absentee Ikelite.