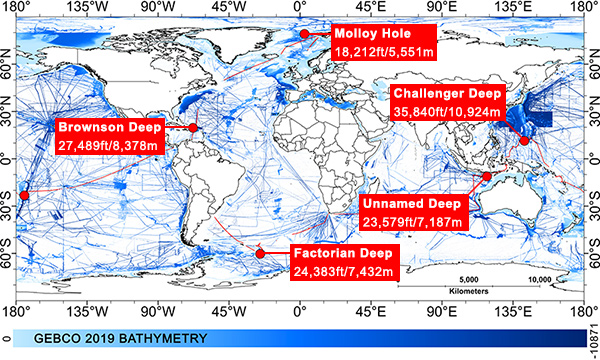 After analyzing data from the historic Five Deeps Expedition, which traveled to the deepest points in each of the planet’s five oceans, scientists have now identified the precise locations where the seafloor bottoms out in the Pacific, Atlantic, Indian, Arctic and Southern Oceans. The lead author of the work, which is published in the Geoscience Data Journal, is Cassie Bongiovanni from Caladan Oceanic LLC, the company that helped organize the Five Deeps Expedition.

At 35,840 feet, or 6.8 miles, Challenger Deep in the Mariana Trench, in the western Pacific, remains—by a large margin—the deepest point on Earth. However, in the Southern Ocean, the deepest point is now confirmed to be a depression at a depth of 24,383 feet called Factorian Deep, which is at the far southern end of the South Sandwich Trench. Similarly, in the Indian Ocean, the researchers discovered a new, deeper section of the Java Trench (as yet unnamed) that is 23,579 feet deep—which is actually situated about 240 miles from the point that was previously considered to be the deepest.

Limiting Factor, the deep-sea vehicle that visited the oceans’ deepest points, along with its support ship Pressure Drop, have continued to work since completing the Five Deeps Expedition. The data gathered are provided to the Nippon Foundation-GEBCO Seabed 2030 Project, whose goal is to piece together a depth map of the entire ocean by the end of the decade. This will be an important resource for climate modeling as well as for fisheries management and conservation, given that underwater mountains tend to be magnets for marine life. 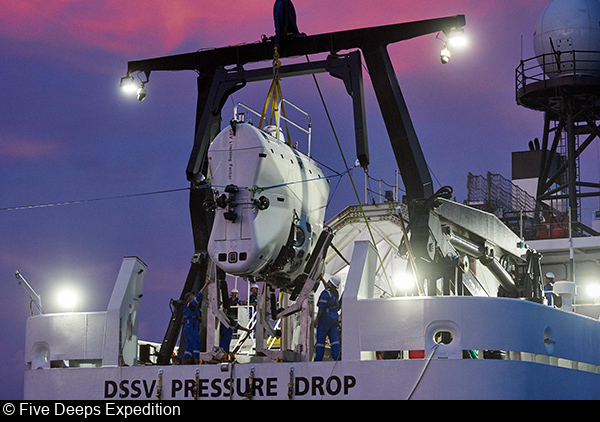