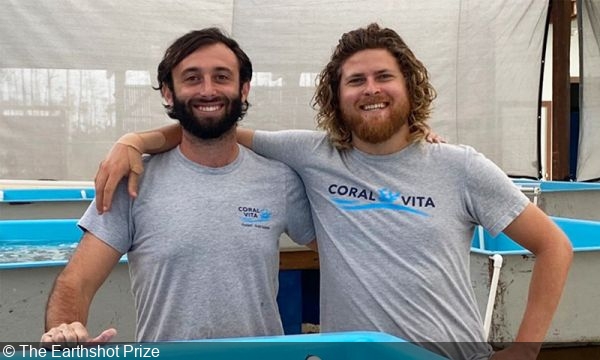 Two best friends who grow coral are among the winners of the inaugural Earthshot Prize, an awards program designed to discover new ideas and technologies tackling Earth’s most pressing problems. Coral Vita, a coral farm in The Bahamas, is the winner in the “Revive Our Oceans” category and its founders, Gator Halpern and Sam Teicher, will receive a grant worth £1 million ($1.37 million) to develop and scale up their enterprise.

Halpern and Teicher became friends at the Yale School of Forestry & Environmental Studies, where they both received Master of Environmental Management degrees. After launching the Social and Environmental Entrepreneurship Club and receiving Yale’s first Green Innovation Fellowship, they set out to launch a company to solve global coral reef degradation.

According to Coral Vita, their methods allow them to grow coral up to 50 times faster than traditional methods as well as improve resilience to the impacts of climate change, such as elevated water temperatures and ocean acidification. The company says a single farm has the potential to supply coral for an entire nation, and its founders ultimately envision a network of these farms in all countries with reef systems.

Pristine Seas and Living Seawalls are the other finalists in the “Revive Our Oceans” category. U.S.-based Pristine Seas, an initiative founded in 2008 by National Geographic Explorer-in-Residence Enric Sala, works to inspire the creation of protected areas and has already helped establish 24 marine reserves around the world. The team of scientists, filmmakers and policy experts aims to protect 30% of our oceans by 2030. Meanwhile, Living Seawalls, a flagship program of Australia’s Sydney Institute of Marine Science, is engineering special panels designed to transform flat, lifeless sea defences into thriving habitats for marine life. The installations can be incorporated into new structures or retrofitted onto existing seawalls, and the company says it has seen an increase of up to 36% in the number of fish, seaweeds and invertebrates in areas with Living Seawalls.

Awarded annually to five winners each year from 2021 to 2030, the Earthshot Prize is run by the Royal Foundation of the Duke and Duchess of Cambridge. It awards a £1 million prize to each of the winners in five categories: “Protect and Restore Nature,” “Clean Our Air,” “Revive Our Oceans,” “Build a Waste-Free World” and “Fix Our Climate.”