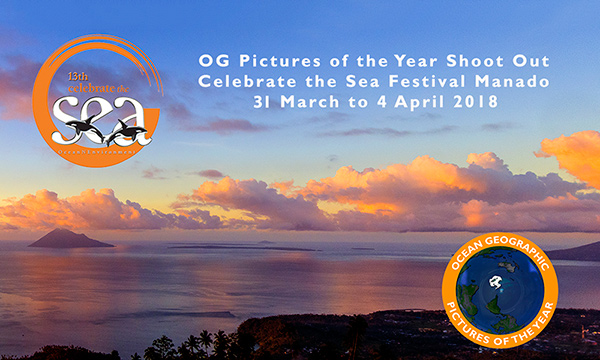 The organizers of Celebrate the Sea have announced that the festival will be taking place in Manado, North Sulawesi from March 31 to April 4 next year. Alongside the festival is the International Underwater Photography Shoot-Out Competition (from April 1–3), as well as the announcement of the winners of the 5th annual Ocean Geographic Pictures of the Year competition.

The festival is concluded in Singapore on April 7 with the announcements of the winners of the competitions.

See the press release below for more information.

Announcing the Most Exciting Festival of the Sea in Asia
Celebrate the Sea Festival, Manado, North Sulawesi 2018

Celebrate the Sea Festival is heading to Manado, North Sulawesi from 31 March to 4 April 2018. The festival’s mission is to use the power of pictures to inspire conservation and protection of the ocean environment. The festival in Manado will celebrate the splendour and richness of the marine bio-diversity of Bunaken National Marine Park, Bangka Island and the Lembeh Strait, with the underlying objective being to spotlight threats from climate change and pollution, particularly in this remote, coral triangle region. The 2018 festival will be used as a platform to call for the ban of shark fins in restaurants, and to work towards eliminating single-use plastic. The Provincial Government of North Sulawesi supports these initiatives. The 2018 festival will take place alongside the 5th annual ‘Ocean Geographic Pictures of the Year’ competition.

An impressive panel of high-profile, international speakers, led by ‘Her Deepness’ Dr. Sylvia Earle, will headline with insightful observations into the state of the oceans alongside the best ways we can work together towards the vital protection and regeneration of this most precious resource on earth. Multi-award winning journalist, television presenter and filmmaker Craig Leeson accompanies his highly acclaimed film ‘A Plastic Ocean’ which he wrote, directed and produced. They will be joined by National Geographic photographers David Doubilet and Jennifer Hayes and the festival founder; wildlife photographer, explorer and conservationist Michael AW, along with an impressive array of scientists, artists, innovators, photographers and passionate marine advocates.

A major highlight is the International Underwater Photography Shoot-Out Competition from 1-3 April 2018, with prizes totalling over $35,000 value - one of the richest shootouts in the world. Many resorts in the area are supporting the competition bringing attention, along with the diving community, to this beautiful, rich and diverse diving location. The overall winner will be named ‘Master of the Competition’ with a cash bounty of around USD 5,000. A regular feature is also the children’s art competition, aimed at inspiring the energy, enthusiasm and curiosity of the future ambassadors of our planet.

The festival opens at 13:30 on 31 March 2018 at the central Manado Megamall auditorium with a packed schedule of keynote speakers and presentations up until the opening ceremony at 18:30, also in the Megamall complex and hosted by the Provincial Government of North Sulawesi. The Photography Shoot-Out Competition then takes place at local participating resorts from 1-3 April.

On 4 April we relocate to the modern 4* Mercure Tateli Beach Resort with a spectacular view over the Celebes sea around Bunaken National Park and classic volcano-shape of Manado Tua. Lunch is followed by another round of keynote presentations by our keynote speakers and a display of the finalists in the ‘Ocean Geographic Pictures of the Year’ competition. The Manado festival activities culminate in the closing ceremony and dinner at 18:30, once again hosted by the Provincial Government of North Sulawesi.

Land-based day tours have been specially created for festival delegates and competition entrants to give a further, rich insight into this fascinating region before heading over to Singapore for the finale.

The exciting culmination of the 2018 Celebrate the Sea Festival will be in Singapore on Saturday, 7 April at 18:00 onwards at a celebration party and presentation evening involving most of the notable speakers and personalities from Manado. This is where the winners of the Shoot-Out and OG Pictures of the Year competitions will be displayed and announced and the ‘Master of the Competition’ named and crowned.