Canon announced two new pro camcorders, the X305 and XF300 that are both priced at under $8,000 but come packed with all the pro quality features. One new feature Canon has added is the ability to record directly onto compact flash cards. This means one thing to me -- there are going to be some seriously large CF cards being released soon. Full press release below.

anon U.S.A., Inc., a leader in digital imaging, announces the Canon XF305 and XF300 Professional Camcorders. Both new models employ an MPEG-2 4:2:2 50Mbps codec – Canon XF Codec – for capturing and recording native 1920 x 1080 video onto affordable, universally available Compact Flash (CF) cards. Uniting video, audio and metadata into a single file, the Canon XF305 and XF300 use an MXF (Material eXchange Format) File Wrapper, a widely supported open-source format, to maximize compatibility with existing industry infrastructure and non-linear editing (NLE) systems. Priced under $8,000 per model, the Canon XF305 and XF300 are engineered for multiple production applications including broadcast news, documentary and independent filmmaking and event videography. Canon will be demonstrating a variety of professional applications for the Canon XF305 and XF300 at the Company’s booth# C4325 at the 2010 National Association of Broadcasters (NAB) Show in the Las Vegas Convention Center. 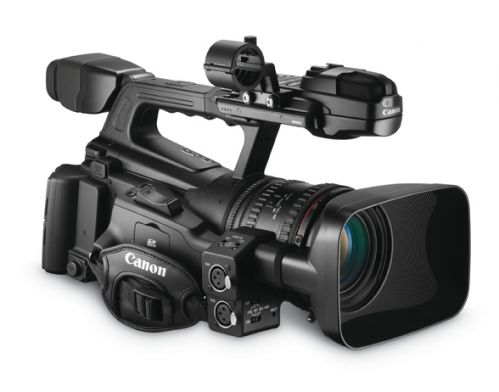 “The creation of HD video content continues to grow across every market category,” stated Yuichi Ishizuka, executive vice president and general manager, Consumer Imaging Group, Canon U.S.A. “We are proud to introduce the new Canon XF305 and XF300 Professional Camcorders, which provide extraordinary image quality, a generous array of features and seamless integration with file-based workflows, all at an attractive price. These camcorders provide the convenience, production cost and quality that the HD video market has been asking for.”

Further adding to the low total-cost-of-ownership of the Canon XF305 and XF300 Professional Camcorders is their use of CF cards. In addition to rugged, solid-state construction and the speed and ease of file transfer to computers, CF cards are cost effective and widely available, unlike proprietary memory systems. The new Canon XF305 and XF300 Professional Camcorders feature hot-swappable dual card slots and support UDMA CF cards for maximum performance.

To support the swift adoption of the Canon XF Codec, Canon has worked in cooperation with major editing and post-production software developers, including Adobe, Apple, Avid, and Grass Valley, to ensure compatibility with leading software programs widely used within the video production and broadcast industries. 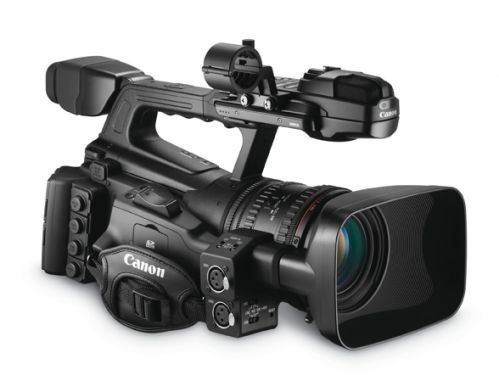 To maximize the camcorders’ adaptability across various production environments, Canon equipped each model with the ability to record at multiple bit rates, resolutions and variable frame rates for slow and fast motion.

Additional professional features include variable-interval (for time-lapse) and frame-record for stop-motion animation, and a photo feature for frame-grabs.

Refined Ergonomics and Operation
The Canon XF305 and XF300 are designed to maximize shooting comfort and usability. The well-balanced design allows the operator to comfortably control the camcorder and easily maintain a steady shot while minimizing arm fatigue. Each camcorder also features a convenient, freely rotating 4.0-inch, 1.23-megapixel LCD monitor that can be positioned at either the right or left side of the camcorder body, allowing for easy viewing even in the most difficult shooting positions.

The LCD monitor also provides a display of the camcorders’ built-in waveform monitor and vectorscope to aid in achieving accurate exposure and color levels while shooting. Additionally, the LCD can show peaking, edge-monitor-focus and magnify the image, enabling users to confirm critical focus, an essential objective in all HD production. 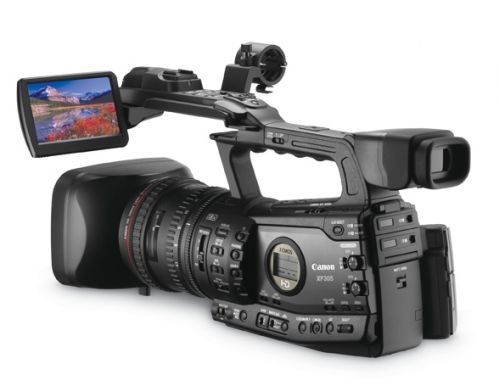