There has been a lot of focus on shark finning in the last few years. Just throw the term in DPG's search box and you will find many articles that focus on the topic, and right so -- sharks needs our attention.  There have been some significant blows to the shark finning industry, and some steps in the right direction towards ending this cruel practice. However, it seems like a lot of Western efforts, while well intentioned, were just hoping on the "shark bandwagon" and so many popped up that just didn't have scientific knowledge or funds to really be effective.  I grew very weary of the different campaigns, and even wondered if they were hindering shark conservation.

I stopped following many of the different campaigns. Even though I realize that charities work on the basis that you will donate your money to them in a way that prohibits you from really knowing what is used for, I had little faith that my money would be used efficiently against shark finning if I donated to one of these new campaigns.

A recent campaign made me rethink my cynical attitude towards Western shark finning campaigns. Shark 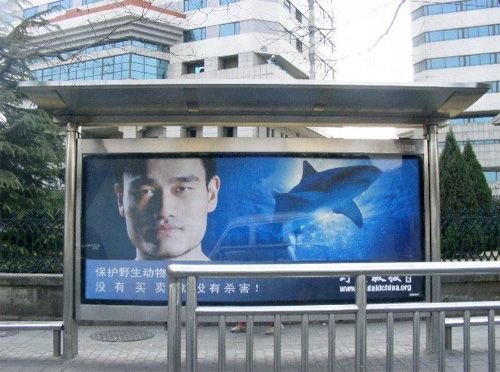 Savers and WildAid are collaborating on a multi-media campaign in China targeting the consumers of shark fin soup by putting up billboards in China that feature Yao Ming. $100 buys a bus-stop billboard placed in the streets of Shanghai and Beijing. This price covers production, installation, maintenance, and lighting for a full year Right now, one of Shark Savers sponsors is matching any offer, so $100 really buys you two billboards.

According to the campaign, last year, WildAid had 200 billboards in Beijing for 3 months. In a survey, 19% of Beijingers responding remembered having seen the boards and 82% of those people said they would stop or reduce their consumption of shark fin soup.

I think that if the efforts gets enough support, it can really be effective. I plan on pledging my support after
almost a years absence of supporting a shark finning campaign.   You can learn more at the Shark Savers webpage. 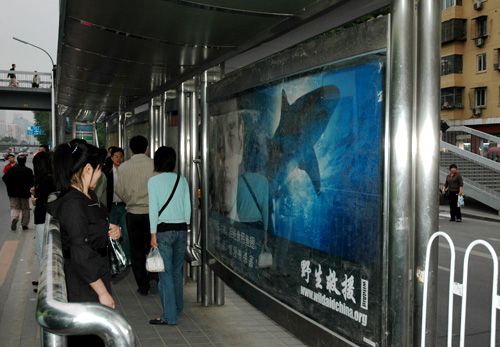