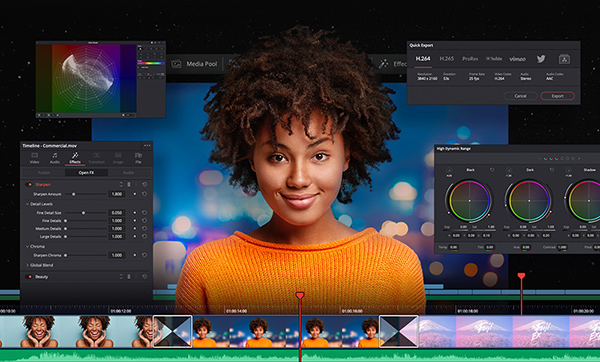 Blackmagic Design has announced the latest release of its video editing software—DaVinci Resolve 17. According to the company, the new version includes over 100 new features and 200 improvements. “This is a massive update and it has amazing new technology and features for colorists, audio engineers, editors and visual effects artists,” says Blackmagic Design CEO Grant Petty, adding that there also “thousands of small improvements that customers will notice every day.”

Among the most notable updates are various improvements to color work, including new HDR color wheels and mesh-based warping tools that allow two color parameters to be adjusted at once (hue and saturation or chroma and luma) by dragging control points “with smooth falloff for clean, natural looking adjustments.”

In terms of audio post-production, DaVinci Resolve 17 features the “biggest update in Fairlight history,” promising new features, tools and core improvements. The new Fairlight Audio Core allows you to work with up to 2,000 tracks at a time with real-time EQ, dynamics, and plug-in effects. There’s also a new transient analysis tool that automatically detects individual words, beats or sound effects, displaying transient markers in the waveform as vertical lines, which can be navigated via the arrow keys. These markers are designed to make it easy to identify specific parts of a sound for editing.

Blackmagic says it’s now easier than ever to select and track people for targeted correction: The DaVinci Neural Engine is used to automatically create masks for an entire person or specific features such as face or arms. You can edit in 16:9 HD or Ultra HD and quickly create square or vertical versions for publishing to platforms like Instagram, and the DaVinci Neural Engine automatically identifies faces and repositions them inside the new frame.

DaVinci Resolve 17 (currently still in beta) can be downloaded for free from the Blackmagic Design website. To get all the fancy new features, you will have to purchase DaVinci Resolve Studio, which costs $295.